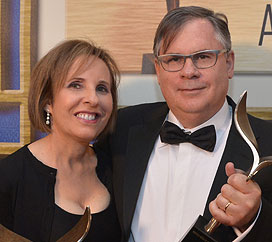 First of all, we were screenwriters for decades and screenwriting is about procrastinating. What do you do when you procrastinate? You surf the Internet. And we have seven writers so that's what we talk a lot about.

When husband and wife team Robert and Michelle King lost their gig writing pilots at ABC in the wake of the 2007 writers' strike, they took the opportunity to check in with themselves. "We didn't really want to dance to someone else's tune anymore," explains Robert. "We were getting older, so we wanted to get as much as we could out of our next job."

"And by get as much as we could,' we mean creatively," adds Michelle.

This new attitude proved to have a few benefits. "It gave us the freedom of not worrying about failing," Robert says, "because there had been just so much failure up to then, so why not just charge ahead in whichever way we wanted?"

And it seems the way they wanted turned out to be the right way. Their CBS law drama The Good Wife is litigating its way through its sixth season, garnering a tidy pile of Emmys, Golden Globes and this year's Writers Guild Award for Episodic Drama along the way. Two years ago, the show landed on the WGA's Best Written TV Series list as voted on by Guild members.

The Kings spoke with the Writers Guild of America West website about how they keep the show an awards season favorite year after years and why lead actress Julianna Margulies' character Alicia Florrick will never discover inappropriate Weiner photos on her cell phone.

The Good Wife is aging quite well. What you credit that to?

Robert King: CBS has given us the freedom to remake it any way we want, so each year we look at it as if, "Okay, this is a new show. How would we want to tell the story this year?"

Michelle King: There's also been an urge not to work to a pattern on the episodes. We want them structurally to be different every episode. It's hard to do, but that allows you to try to keep it fresh.

Robert King: What's really good is you do 22 episodes a year, which gives you a lot of room to experiment. I mean we did one episode where 80 or 90 percent of the episode took place in Julianna Margulies' mind. And we did one where Alicia's writing a speech and it takes her back into the past. It just allows you to play with form more, making each episode a little more of its own movie.

Does the network ever say, "Yeah, don't know about that"?

Michelle King: Not at this stage of the game. Season one there was more oversight and more concern creatively, but at this point they're incredibly supportive of the show.

Robert King: Yeah, the most oversight we had was the first six episodes, seven episodes. I think there was a real sense you've got to repeat whatever worked in the pilot, but it is strange the amount of freedom there is to just have some fun, which is the way we describe it. We do tell them in an arena document, which is like a one-page document, what the episode will be, that this is the different structure.

Michelle King: Frequently what we'll discuss with them is content and the area that we're going to be looking at, but not typically structure.

Robert King: We never had a complaint, so that's good.

How far ahead do you plot?

Robert King: Well, the major plot of Alicia's story has been plotted since the first season. We knew half way through the first season where we were headed with Alicia's story. Then each season we sit down with our writers' room, which is seven writers and ourselves, and plot out all of the main tentpoles for the year. There are five or six major tentpoles and those never change. We might change where we think they'll arise, if we said episode 10 it might be episode 14 or so on, but beside that they don't change. And then all the smaller details that go into getting us to those tentpoles, those change and those we try not to slavishly dictate. We try to have whatever casting opportunities come along our way, whatever we discover in dailies with the actors, we try to let those guide us. But then we're always holding firm to our major story.

So you have several seasons of her life already planned?

Robert King: Yes, or at least where we know the major points will be thematically and also even sometimes with specifics. For example, we didn't know it would be Will Gardner who was dying so he would leave the show, but we did know she would be touched by death. We were thinking it might be her husband, Peter.

You base a lot of the show on real-life situations and people. Are you ever concerned about hitting too close to the bone?

Michelle King: We're pretty careful not to base it on real situations and real people. We are sometimes inspired by real situations, but we always take it in a different way.

Robert King: We were burned a little bit by this. We had an episode that was like a Chicago version of Ferguson. It was written after the events over the summer but before the grand jury came in in November. So the zeitgeist basically changed on us; it was a slightly odd episode, in that it was a real reference to Ferguson when Ferguson meant something different, before the grand jury came in. When the episode aired it just felt a little off, like it was addressing something that had passed.

And then there are the lucky accidents. We did one two weeks ago on gay marriage before all the events of religious freedom versus marriage equality. It seemed like stars aligned where it was very much part of the conversation of that week.

Do you ever say, "Yeah, we're not touching that"?

Robert King: Yeah. For example, Anthony Weiner's sending his penis photos around. It was as obvious of one as you could get, but we also knew that it would be two months before the episode could air, so you would feel like you came to the conversation late. There are some things in the zeitgeist that are so hot at the moment, you know they're going to burn out very fast.

Michelle King: We've also found that any story that seems like it could live in a different crime or law show is probably not the right story for us.

Robert King: And that's the way you can assure that SVU didn't do something a week earlier.

Can you give an example?

Robert King: I could give you an example of one we thought had been done. We did an episode a month ago about 3-D printing technology and the ability that has to make fairly efficient guns. We had someone crippled by one. Who is subject to suit? Is it the person who printed the gun, is it the person who designed the gun and put it on the Internet as an open source file, or is it the printer itself in the way that there wasn't an even distribution in the printing? And we thought someone had done it, so we went looking to see whether we were on the tail end of that conversation. We weren't! We found that we hadn't been beaten to the punch.

We kind of try to contain our stories to social media, Internet-based not completely but often and it doesn't feel like other shows are pursuing that as thoroughly.

Robert King: First of all, we were screenwriters for decades and screenwriting is about procrastinating. What do you do when you procrastinate? You surf the Internet. And we have seven writers so that's what we talk a lot about.

One other thing is it always bothered me to watch other shows and find the Internet handled incorrectly, whenever someone put a QuickTime file on their computer it filled the whole screen, when in fact your desktop is still visible as a box within a box. So it started with this idea that we just had to be more truthful to our experience with social networking, how our lives have been changed by technology. Then we found that we were fascinated with how that was changing the law. One case was about a judge who mindlessly friended somebody on Facebook and it turned out to be one of the jurors on a trial, so the trial was thrown out.

Michelle King: Ironically, we heard later that that episode, or parts of it anyway, were being shown to new judges to warn them of that very thing.

So it seems like you've managed to tap into the zeitgeist without really trying.

Robert King: Almost anybody who works in L.A. or New York as a screenwriter or TV writer deals a lot with the computer and the Internet. Just think about how our lives have changed in this last decade. I just remember when we were sending scripts through delivery services. Now you push a button and the script ends up on 20 executives' desks. Obviously, that's the minor part of how it's changing the world, but how it's changing the law is fascinating. While we're not lawyers, we know how we use social media, how we use technology, so we get our heads together with the lawyers on our writing staff to figure out how that might change the law.

How many lawyers do you have and how involved are they from a lawyerly perspective?

Michelle King: It depends from season to season. Last season, season six, out of seven writers, three were also lawyers.

Robert King: And then the world is our oyster that you can call a lot of lawyers or think tanks and get answers on anything. What makes the show a joy for us is when they're very well researched and seem to have a cutting-edge attitude towards what comes next. Sometimes our audience gets more involved with a love triangle or with bigger moves with Kalinda or Alicia, but we always love these cases that seem a little more cutting-edge about what's in the news.

READ ALSO: Marti Noxon and Sarah Gertrude Shapiro go for the jugular with UnREAL, a drama about the making of a reality dating show
Share