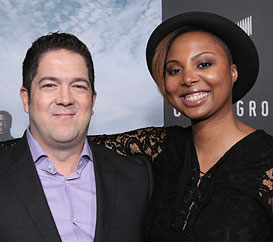 Surprise is certainly a key. If one of us says, ‘What if this person does this?’ If you can see it, if it’s something that surprises, but it’s informed by their character, that’s when we hit gold the most.

Misha Green and Joe Pokaski, creators behind the critically lauded WGN America series Underground, are all about the mash-up. They themselves are from diametric ends of the country – Green, a Sacramento native and Pokaski from Beantown – but with Underground they have winningly joined a drama about the stark history of Antebellum slavery with elements as unexpected as their shared love for comic books.

Funny as that might sound, it works. A key reason is that the show is character-driven – following the slaves that run, the ones that stay, the people that help and those that hunt escaped slaves for money. Underground is honestly connected to the historical gravitas of America’s original sin while also understanding that the real history is filled with breathlessly thrilling tales of courage and near-superhuman heroics.

It’s subtle, but if you know these two met on Heroes, it makes total sense when you watch Underground. Pokaski was as surprised as anyone when the two discovered, while on Heroes, that they made a good team. “We were in season four. I had been there the whole run, and they brought in this new hotshot writer, and we wrote a script together,” He recalls. “Normally, as you probably know, when you write something with someone else, you hate them by the end. But it was quite the opposite in our experience.”

The duo spoke with the Writers Guild of America West website about how they work, bringing entertaining narrative elements to a scarring period of American history and how a good sounding title was all it took to inspire the entire show.

Underground tackles a brutal, profoundly tragic period of American history, but it’s also super entertaining with even kind of pulpy, soap opera-y elements of fun. I’m curious how you arrived at this balance?

Misha Green: Yeah, and really trying to push the bar, storytelling-wise, visually, musically – across the board. You know, we feel like we’ve seen this period depicted a certain kind of way, and we were reading stories about the ingenuity of those escaping and those helping along the railroad, and, for us, it quickly became a thriller. That’s what we talked about from the inception of it, that this is a thriller, that we wanted people to be surprised. And we wanted to use the long form of TV to really get to know these characters, so you can laugh and love and cry with them.

Going back to that blank page place you were at before any of this existed, was there any anxiety about bringing the thriller element, and those other fun narrative television elements, to this subject matter? Was there any concern that it could become flippant or trivial?

Joe Pokaski: No, not at all. We were just surprised this story hasn’t been told, because this is the greatest story that’s never been told in American history. The more we did research, the more the research supported the tone that we’re going for – these are people who were risking everything for the notion that they thought they should be free, and they put it all on the line. It should be a story that’s told in an exciting way.

What was the actual initial inception of this idea? Who came up with this, and how? Or why?

Misha Green: It’s actually quite simple. My sister one day said, “You should do a show about the Underground Railroad.” And I said, “Oh my god, Underground would be a fantastic title!” And I never come up with good titles, so I got super excited about that. Going a bit deeper than that [was] the realization that this needed to give a voice to people who have been voiceless – we’ve seen a lot of this time period depicted where we don’t really get into the lives of those who were enslaved, and that was really important to us. When we started researching, listening to the slave narratives at the Library of Congress and just hearing people in their own words talk about their lives and how complicated it was – that became the source for us – which was why our cast kept getting bigger and bigger, because we’d just read this story and be like, “Ugh, [now] we have to tell that story too.”

The Great Escape has been mentioned in relation to Underground, and I’m curious if that’s a model for this band of slaves, each with a sort of specific skillset.

Joe Pokaski: Yeah, I remember seeing that when I was very young. I’ve heard it referenced plenty of times.

Where did that notion of this band of escapees, where each one has a particular skill set, come from?

Joe Pokaski: Part of it simply came from the idea that we wanted to make sure we didn’t just have two-dimensional characters playing enslaved human beings. There were blacksmiths and there were carpenters and there were field slaves and there were house slaves. Each of their experiences were really various within the horrible context. We wanted to have slaves who had agency – people who had their own similar goals but different teams.

Misha Green: I also think it just comes from a collective genre love that we have. We both love comic books, we both love all of that stuff, so that’s kind of an inherent thing, that we saw the parallels between that time and the genre, kind of comic book-y feel.

Yeah, your comic book background comes out in that, in the way those skills are distributed – this band.

As far as including the abolitionist white couple – you wanted to do that from the very beginning?

Misha Green: This was a story about the Underground Railroad – one of the first integrated civil rights movements. It was important for us to show people who were risking their home to fight this injustice. That’s just as a noble and heroic thing as those people who were choosing to run 600 miles.

From just a narrative standpoint, it obviously helps the dimensionality of the story here as well, adding that layer of complexity?

Joe Pokaski: I think so. Our approach was kind of novelistic in the fact we started off telling four stories. We started off telling the story of the slaves who decided to run, of the people they left behind once they did, of the people who helped them along the way, and we also wanted to touch on the economy and culture of the slave catchers – people who were paid to bring them back dead or alive.

Misha Green: And we’re both ADD a little bit, so being able to switch stories is always fun when you’re writing.

Don’t you think that’s kind of become a necessity, in the sense that it seems that today’s viewers want multiple stories, they want genre mash-ups?

Joe Pokaski: A lot of the stuff we like, I think so.

Joe Pokaski: I like the pace moving fast, I like jumping between different stories. [I like] a show that keeps me awake and on my toes.

When you guys write together, how does it go down? What’s your routine?

Joe Pokaski: Some whisky, yelling, whisky bottles eventually get thrown once they’re empty. No, we tend to take passes and pass them back and forth. We have the best idea wins system. Then we try to take the worst story and make it the best and keep doing that until everything is really washed and feeling tight.

Have you found in your partnership that one of you has [more of] a certain specialty area then another, or does it switch around?

Joe Pokaski: It switches around. We both have a feel for making things better, so we just keep doing that.

Joe Pokaski: Yeah, I’ll give it to Misha, and I’ll get it back better. Then she gives it to me. I find that we both kind of have similar mentalities that not only work on the page, but in post [production] as well.

Misha Green: Yeah, not being precious about anything, and really just trying to make it better and more exciting and more surprising – it is that spirit of the best idea wins, for sure.

Joe Pokaski: Surprise is certainly a key. We’re both so tuned into these characters, if one of us says, “What if this person does this?” If you can see it, if it’s something that surprises, but it’s informed by their character, that’s when we hit gold the most.

READ ALSO: Carlton Cuse, the creative force behind Colony, Bates Motel, and The Strain on why collaboration is the key to his ability to run multiple shows.
Share