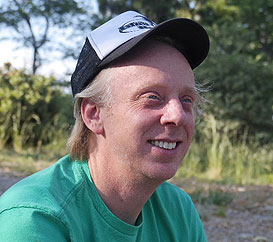 I just felt like, at the moment, I cannot write just some animated family movie right now. I need to get these feelings off my chest, and whether the movie ever gets made or not, or whether it’s too polarizing—I don't care.

The script for Beatriz at Dinner, written by Mike White, is based on an eminently simple premise at a profoundly apt moment in American history. Had Donald Trump not stunned the world by winning the 2016 presidential election, this film would have been a perfectly timely tale, but with his election, it crackles with immediate relevance. Directed by Miguel Arteta, who first collaborated with White in 2000 on Chuck & Buck and again on 2002’s The Good Girl, this is the tale of Beatriz (Selma Hayek), a Mexican immigrant and holistic healer who collides with shamelessly solipsistic billionaire real estate mogul Doug Strutt (John Lithgow) at a small dinner party hosted by a wealthy client.

Subtly is not on the menu. As White explains he, “just wanted to go for it,” venturing headlong into the fundamental clash these two characters embody. Still, thanks both to his writing and the performances, these characters—particularly Lithgow’s Strutt—are not merely cartoon caricatures, but honest, dimensional representations of real people who hold their respective world views.

Their first interaction, when Strutt thoughtlessly asks Beatriz, “Can I get another bourbon, hon?” sets the stage for a clash that will pull no punches. White spoke with the Writers Guild of America West website about the personal feelings that drove him to write this original script way back in 2015—when most pundits had Trump’s chances of clearing the Republican primary at nil—and why, when he writes a script, he avoids the actual writing until the whole script is fully formed in his head.

Let’s tackle the 800-pound gorilla here with this film. When, exactly, did you start writing this? And explain the enormous parallels—coincidental or intended—between your character Strutt and our new president.

Yeah, I wrote the movie in, I think, the end of the summer of 2015. So Trump was still in the midst of the Republican nomination, and it was early on. And, yeah, I really didn’t think that we would be here today and the movie would, you know, that he would be president. He had just started his campaign, and he had been talking about immigrants, and as someone who lived in Southern California my whole life and had been exposed to the casual racism and not so casual racism that happens frequently here, it kind of inspired elements of the script.

So the primary definitely fed into the early script?

Like I said, some of his rhetoric in the early stages of his campaign definitely [affected me]. I had gotten off social media and was just getting on Google News every morning instead. I mean, waking up to the first five articles and being like, “Oh, God.” You know? It was around the same time that Cecil the Lion [was] shot by the dentist, and I just felt like I wanted to do something that just was, on its face, maybe a comedy of manners, but turns into a war of ideas, two different views of society, and the [perceived] cures for society’s issues.

What were the challenges or issues raised, from a screenwriting standpoint, of tackling head-on societal hot-buttons like these?

There are a lot of issues. The other things I’ve written have, I guess, gotten political, or kind of weighed in on certain cultural things that are happening. But I feel like a lot of people in the country right now just feel like it’s hard to pull your punches at some point, and you feel like your work has to have some relevance to what you feel [about] what is going on right now.

You felt a kind of an obligation.

Yeah, I just felt like, at the moment, I cannot write just some animated family movie right now. I need to get these feelings off my chest, and whether the movie ever gets made or not, or whether it’s too polarizing—I don't care. I just wanted to write from a sense of urgency, I guess.

That makes sense both morally and artistically. But having made that decision, once you get into the mechanics of writing a screenplay where the social issues like these are not just discussed but the basis for the narrative, were there logistical or mechanical differences in writing the script?

Well, it was really more how to get into it and finding the character that was gonna take us into it. Once I found Selma’s character, it was [easier]. It’s tricky, because in the end, people think great art is supposed to be above overtly taking certain kinds of cultural positions or whatever, but I just wanted a little blood in the mouth by the end of it, and felt like I just wanted to go for it as far as stacking the deck.

So you just wanted to burn the strawman here.

So you knew what you were doing at the outset, and your heart was in it. So it wasn’t a very fraught process writing this script?

No, it was pleasurable. It was fun to do. A lot of times you write characters [like] some of the characters at this dinner party, and people are like, “Oh, you're mean to your character. You don't like your characters. They’re too acid.” I tend to want to create fully dimensional characters no matter how big their role is in the script. And at the same time, I felt like, just as an observer of people, I don’t think these people are extreme…There are people like this, and our president speaks to [them]. The character John Lithgow plays in the movie is actually a more sort of three-dimensional person than our president. In a sense, if I had written a character that says the things that our president does and has some of the attitudes that our president has and some of the mannerisms and behaviors that he does, people would say it’s a gross caricature. You just realize people can be this extreme in many ways in real life.

Right. The Hollywood Reporter review of the film said that Strutt is a more empathetic human character than Trump. But while you were writing, did you ever come up against moments of doubt—did you ever worry about Strutt becoming too much of a cartoon character industrialist?

Well, actually, I was more worried about the casting. I felt like it depends on who it is. You want a sense of depth as the story goes along, as the night goes along, and that this character isn’t just one-note. I tried to write that as best as I could…I really feel like some of his points are points that I could agree with. I really think he’s an armchair philosopher who lives by his principles, you know? And she is too. That’s something I find interesting, someone who really, actually has a fully born worldview and lives by that view. Whether that’s an anathema to the future of our world is debatable. But to me, that part, was important in the writing. I also feel like casting John Lithgow is a great thing that Miguel did because he’s somebody who brings a lot of elegance, and genialness in general to it that allows it to be a little bit more elastic and not just a one-note thing.

To you, what is the over-arching message, if there is one, of this film, of this script that you wrote?

To be honest, I don’t know if there’s a message that can be encapsulated in a phrase, but part of me was feeling the need to write something about the kind of despair that the character Beatriz feels, and that certain people who see the problems that the world and humanity and the environment are facing, feel right now. People who feel like it’s hard enough to figure out how to solve those problems, [much less] do it in the face of so much obstinate resistance from certain areas of our populace…that feeling of someone like Beatriz, who feels so much and really comes at it from a place of deep compassion for the suffering [of others]. I hope that the movie provides some kind of—well, maybe it’s heartbreaking—but some kind of catharsis for like-minded people. And for those non-like-minded people, maybe there’s something in there that might, I don’t know, jostle them in some way.

Well, for me, I’ve come to realize that the process that works the best for me in terms of getting the sort of material that I am happy with at the end of the day, is resisting actually writing as long as I can. Meaning instead of starting to write when I have 80 percent of it, just holding off even a little bit more…It’s better for me to just not start writing at all until it’s as fully born in my head as possible. That means the writing process goes quicker, you know where you’re going, and it’s more conscious. It’s not unconscious.

Before you sit down, what is the preamble to that? Are you outlining, are you doing index cards, or are you just working it through in your head?

I think getting the basic terms and just the voices of the characters a little bit, and, yeah, just kind of knowing the destination, the ultimate end, and trying to make sure it’s just complex enough, and there are enough turns in it. This one was more simple because it really was in real-time and it has a different kind of structure. But even for this, the writing was quick. It was really about just kind of digesting it long enough to feel like, “Okay, yeah, I think I know what this is.”

You have a really cool, diverse list of credits. I'm curious how you approach deciding what projects you write. For example, you’re coming from this socially charged dark comedy, and the next thing you did was The Emoji Movie…How deliberate is that diversity in your project selection?

I mean, honestly, not to sound like too much of a philistine, but I cannot live on the money I would get on Beatriz, especially if you break it out over the years it takes to make it. So to be honest, I try to approach everything whether I’m getting paid or if it’s just on my own idea, with the same kind of earnestness. But yes, I prefer to just do original stuff that’s really just mine, but I also think I get a lot out of the exercise of trying to come through for someone else and trying to make those studio ideas work.

Before we go, is it true that Sam Shepard’s mom was your second-grade teacher?

Yes, she was. That’s right.

Well, yeah, it was more like she was just a great teacher, and I knew her son was a playwright. That was where I got the idea, I realized that you could do that as a career. I read his scripts early when I was young.

[Laughs] I don't know I understood it, but I just liked the way it all laid on the page.

READ ALSO: Mike Mills melds the personal and political to script a lyrical ode to his mother in 20th Century Women.
Share