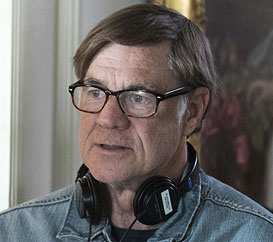 For me the outline is a starting place, but then when you fill it out, it’s different because you filled it out. So then you need to re-outline and rewrite.

Cartoonists are rarely household names, but if you’ve read a New Yorker, a Playboy, or a weekly city newspaper like the LA Weekly, you’d probably smile knowingly at the work of John Callahan. Crudely drawn and brazenly unchained from any politically correct bonds, his box cartoons lampooned sacred cows from religion and sex to the topic closest to him—people with disabilities.

Gus Van Sant helmed and scripted the new film about his life, Don’t Worry, He Won’t Get Far On Foot, starring Joaquin Phoenix as Callahan, Jonah Hill, and Jack Black. It takes its title from Callahan’s 1989 autobiography, which Callahan himself took from the caption of one of his own pieces depicting a posse of cowboys (a favorite theme) who’ve come upon an overturned wheelchair. His early life was filled with much darkness, from a molestation at the age of eight to taking up drinking at the age of 12, to ultimately becoming a quadriplegic at 21 in a car accident after a long drinking binge with a buddy. The Portland native kept drinking for six more years before finally quitting, with the help of Alcoholics Anonymous, at age 27 and taking up drawing cartoons by holding a pen between his two hands and his mouth. While many of his cartoons sought to seize control of life in a wheelchair through lancing humor, many were just irreverent, witty fun, like one of a policeman chasing a snowman with bags of money in his stick hands shouting, “Thaw!”

Van Sant applies his own airy, cool, West Coast-Warhol style to the abundantly tragic subject matter. Blunt humor of the type that defined Callahan’s work is the antidote to despair and anger, though both remain crucial to the proceedings, as they are often essential to the joke. Van Sant spoke with the Writers Guild of America West website about what attracted him to the story, his own adolescent dalliance with cartooning, and how, though he knew of Callahan as a fellow Portlander, it was the late Robin Williams who first brought the story to him to develop.

I know you knew Callaghan just as a fellow Portlander, but tell me about how Robin Williams was involved in really introducing you to his story.

By the time I got to know his work, he was quite well known. He had been published in Playboy and The Village Voice, and the LA Weekly. Robin [Williams] had optioned Callahan’s book in the mid ‘90s. [He] had been a fan through the weekly paper in San Francisco…Callahan was notorious because of the subject matter of his cartoons and the fact that he was also a quadriplegic. Having read his book, I think Robin was very attracted to the whole idea, a type of comedian who was also a quadriplegic. Robin’s friend Christopher Reeve had an accident and was quadriplegic, and that was something that was close to Robin. And then obviously the humor was very close to Robin’s. We knew each other from Good Will Hunting and I was from Portland [so] he and his wife Marcia said, “Would you like to develop this?” I was like, “Yeah, that’d be great.”

So we worked on a screenplay. This is probably ‘98. We presented them the script, and we did a rewrite, and then it just kind of never really went anywhere. There were other projects in the way, other projects that they were doing. I’m not sure exactly how many projects they were dealing with and/or also maybe how many dissenting votes there were from potential money sources, you know? Because they didn’t think that it was the type of thing that maybe studios wanted Robin to be doing. They wanted him to do something a little more clear cut, because it was complicated. The other attraction probably was John’s Alcoholics Anonymous journey. That was in the screenplay and in the book. By the end of the ‘90s, there had been a number of projects that were AA stories that hadn’t done well, so that was a potential pothole.

What resonated with you about this story, aside from Williams encouraging you?

By then I had done like at least three different movies that were based on the streets of Portland and here was another one. It was [about] a guy who conceivably could have run into the characters from Drugstore Cowboy, Mala Noche, or My Own Private Idaho all in the same cafe, you know? But it fit into a history of doing Portland stories. That was an inspirational thing. It was very new. I mean, the whole idea of doing something about a cartoonist was interesting because I was a junior cartoonist when I was a kid. It was just something I did in junior high school. The centerpiece was always his alcoholism and his awareness of that being a problem and his cartooning coming out of a period of his life where he had learned to stop drinking and had a little more clarity and more time to do something like cartoons and becoming inspired by that. That was always sort of the main event in his story.

So the art of cartooning [was] kind of almost the fruits of sobriety.

Yeah, exactly. So I always thought that was the most interesting, something I hadn’t done before. It was about his therapy, and that was all interesting.

I saw you mentioned in one interview that the unexplored nature of the story was appealing. It’s kind of fresh earth, if you will. Was the challenging nature of Callahan as a character and the heaviness of the story an appeal for you?

The heaviness, yeah. The accident and the alcoholism and because he had the edge to him as well...

That kind of existed in all my other characters as well. So that wasn’t particularly new, the edginess.

Of course, but you said in one of your recent interviews that there was new territory for you here that was appealing?

As for the script you talked about doing three drafts at least of this material. How many drafts went into the shooting draft?

Well, there were originally two drafts. Those two writers are on the poster now—Andrew Eatman and Jack Gibson. Then the second writer was Patti Sullivan, and she wrote a draft and then a rewrite, just the traditional draft and rewrite. Then when I worked on it, I made a draft on spec, so there wasn’t a traditional draft and rewrite. I was just doing it on my own. But when it was bought by Amazon, it was just bought. They paid for a script, not drafts and rewrites and so forth, although that one had many drafts. But screenplays tend to, even if you hand in one draft, you might have done 10 drafts.

So the draft that ultimately Amazon purchased had gone through multiple drafts, it was heavily drafted, if you will.

Is that heavily drafted for you?

Yes. For me, it was part of trying to make a decision whether to make it or not. I didn’t own the book. I was making it without the ownership of the book, so what I was writing was something that could prove to me that I wanted to go ahead and try and pursue it, try and get somebody to make it.

How frequently have you used the script as a proving ground to see if something is worthwhile to follow through with?

Just on an artistic level, whether you’re writing it spec or for a studio, do you find out whether something is worthwhile when you’re immersed in the writing?

This is the only time that I wrote something where there was a possibility that I would never get the rights to it. So the other ones like Drugstore Cowboy, Mala Noche, My Own Private Idaho, I had the rights, I had the stories. There was never any question. With this one, I was kind of just writing to see whether I wanted to go through the trouble to try and deal with getting the rights.

I spoke to you years ago for Last Days and we talked a little bit about how you balance your love for organic reality, which you’re so good at, with the need for narrative structure when making a film. How do you balance those two poles—the free, organic real feeling, with the structure of a film?

Well, usually for me the narrative construct is a story. I mean, I’m casting with the idea that I’ll be able to go off the script, but the script is usually playing a kind of traditional role. If there is a traditional script, the scenes are written down as regular scenes with the possibility that they’ll be changed, but they’re sort of placeholders with which to change. Like Elephant, for instance, had a screenplay where, in one case, the three girls walk for 10 minutes and talk about makeup—that was all written out. There was like 10 pages of dialogue, none of which we used. They just did their own dialogue. In that case it was really a placeholder, whereas in Don’t Worry, we did make things up on the set, but there was a pretty traditional script.

Do you outline much?

A lot of writers tell me they can spend more time on the outline and then the actual script is more of a dictation process.

Well, no, because for me the outline is a starting place, but then when you fill it out, it’s different because you filled it out. So then you need to re-outline and rewrite. At least that’s what I do.

When you’re actually writing, what’s your vibe? What’s your ritual?

Right now I’ve been writing at the kitchen table, and there’s a view out the window of the Hollywood Hills. I’ll usually write in the morning for three hours, and that can start like at seven or eight. And then if there’s more work the rest of the day, it’ll be more organizational or more thought oriented rather than writing or typing.

Do you feel like there’s a creative window in the morning when you’re most fertile?

Yeah, that’s usually when I am. I can start earlier but still it’s only three hours, or I can later and it’ll be three hours. I tried to fool the system by getting up earlier, but if I started 5 a.m. then I’ll stop around 8 a.m. If I started at 8 a.m., it’ll go until 11a.m., so it usually about 3 hours.

So three hours is your span.

Yep. But I mean it’s three hours of continuous work. It’s not like I work for an hour and then I break for an hour, it’s usually all together.