Perhaps the last thing I thought I write a column about was cables. We all have cables, probably boxes of them. They all work fine, and they’re free, coming included with whatever device we just bought. So…why go to the length of actually buying a lowly cable?

Well, you don’t have to, of course. You’re likely fine as is. But to my surprise, there are cables out there in the world that actually provide some interesting benefits, for those who choose to take advantage of them. And at the very least, c’mon, when is the last time you had a chance to read a column about…cables??! Well, here at last, is your chance. And the good news for the low-tech folks among you, this isn’t a very techie column. But, I think, actually interesting, considering the subject. Here are a few.

The Scosche Charge & Synch cable has three features that make it different from most of the pack, which isn’t shabby when one considers that just one different feature in a basic cable would be surprising. 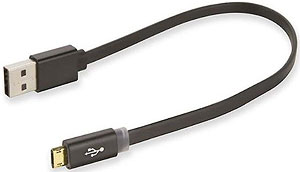 The most noticeable of the changes is that the cable is flat. This isn’t unique or hugely significant, but it’s uncommon and helpful, because it makes it more difficult for the cord to get twisted.

The two other differences though were particularly interesting. The first is that it uses the new “reversible” micro-USB plug (what Scosche calls their EZTip™. This is a new type of micro-USB plug that still isn’t in common use which allows you to insert it into a port in any direction. What’s interesting is that it works with any current micro-USB port, nothing has to be upgraded. Apple’s Lightning plugs work this way, and so does the new, upcoming USB-C standard, but it’s new for micro-USB and extremely convenient.

The final change is that at the end of the cable where the plug is, there’s also a FlatOut™ LED charge indicator. This is a little light that shines red when charging and changes to blue when the device is fully charged. It’s a very nice touch and also is highly convenient, since you can see from a distance at a glance if you’re fully-charged or not. One slight quibble is that only found it somewhat accurate. The indicator generally turned blue when the devices I was testing were at around 96-98% charged. This isn’t a problem, since it’s pretty close to full, and you can always just let it charge for another 15-minutes to half hour. But it would certainly be better if it was a little sharper.

The cable comes in three sizes—10”, as well as 3-foot and 6-foot. I tested the former, which retails at $13, but could be found at the time of writing for $10. I liked the three features a lot, especially the reversible tip, and found the charge indicator very nice, even if not as accurate as would be ideal. 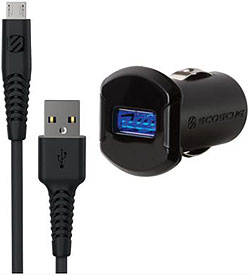 Scosche’s ReVolt HD Kit has some important similarities to the company’s cable discussed above, though with its own important tweaks. To be clear, the kit isn’t a cable alone, but a car charger and cable.

The main similarity is that it too uses the Reversible EZTip™. But it’s probably even more valuable in this incarnation. That’s because a lot of people will likely use their cable and car charger while driving—not always the safest way to go—and so, adding in the concept of fumbling around when trying to plug in your device only makes things worse. But have a reversible plug turns the effort into something simple. No having to look and avert your eyes from the road and juggle things. Just plug the sucker in.

There’s another safety twist here. The charger itself, which slips into your cigarette lighter socket, has a glowing USB port. Why is this important? Well, it’s not during the daytime. But consider driving along at night and trying to plug in your cable when everything is dark. The glowing port…well, again, turns the effort into something simple. And safe.

(The charger itself is fast—12 Watts, and 2.4 amps. The current iPads are designed to charge at 12 Watts. The device is optimized, so less powerful devices won’t be harmed.)

The Scosche ReVolt HD Kit comes with a 4-foot cable, and that’s the only option. It retails for $25. At the time of writing, it retails could be found online for $20.

Though cables are pretty basic, most people have several lying around, there’s one particular problem with most of them. They get twisted a lot, and therefore—being pretty basic—they can get shredded fairly easily, and the plug end (which get twisted even more than the rest of the cord) risk breaking or flaying. And especially since so many cords are left plugged in and flopping on the floor, they get stepped on regularly, added to their breakdown. For most people this isn’t a serious problem—if your cable or plug shreds, you just replace it with another basic one. But especially if you’re in a more high-end environment, and having your cable in good shape is critical—or if you just don’t want to keep replacing bad cables—MOS offers an alternative.

What sets the MOS apart is its construction. It is extremely durable. What cable do you know of that comes with a lifetime warranty? 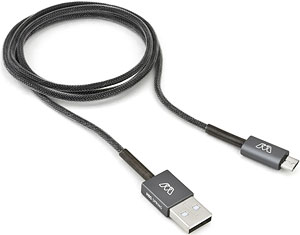 The cable itself is made of a highly rugged woven exterior that offers significant protection of the inner conductor, and exceedingly difficult to tangle. It also had sturdy anodized aluminum heads at each end for added protection of the conductor.

What’s most special about the MOS Spring is its namesake. The metal spring ends which protect the most vulnerable part of the cable, preventing shorting.

Hence the lifetime warranty. Oddly, this design not only provides great protection, but also make the cable, of all things, stylish. (MOS also makes a dock, called a Magnetic Organizing System—MOS. Being magnetic, this allows the metal heads of the Spring cables to attach to it for easy organizing. I don’t think it’s necessary for most people, but it does make working with your cables much more convenient and less messy, though more expensive, retailing for $30 at the time of writing.)

The MOS Spring cables are made for both micro-USB and Lightning plugs, and come in four sizes—1, 3, 6 and 10-foot. I tested the 3-foot micro-USB cable which retailed at $19. This is clearly high-end for something so (well, you know the word by now) basic. Not everyone needs a $19 cable. But this is extremely well-constructed and highly durable, at its own level far above most cables. If your work is such that you want to rely on something that will be sturdy and very reliable under lifetime warranty conditions, it’s worth looking at.

Robert J. Elisberg's other writing can be found at Elisberg Industries. He can be contacted at tww@tidbitbay.com.