RSVP to attend in-person red carpet premieres and screenings at the world’s largest festival dedicated to French cinema and TV. 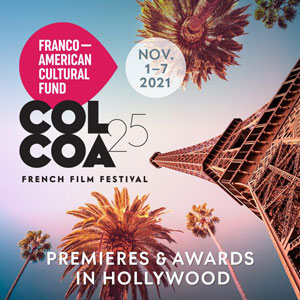 WGAW members and a guest are invited to attend the 25th annual COLCOA French Film Festival, “A Week of French Film Premieres in Hollywood,” which returns to LA on November 1–7. Sponsored by the WGAW in partnership with the DGA; Motion Picture Association; and Society of Authors, Composers and Publishers of Music (SACEM), COLCOA showcases the latest in French film production and is the largest festival dedicated to French cinema and television in the world.

“After a year of isolation, we will finally come together to watch films and series on the big screen, attend in-person Q&As, and exchange our cinematic experiences,” says COLCOA Deputy Director Anouchka van Riel.

The festival brings French filmmakers and talent to Los Angeles for several U.S., international, and world red carpet premieres, panels, and screenings, as well as the opportunity for high-profile collaborations between French and American professionals. More than 20,000 audience members, including journalists, industry professionals, students, and general public have attended the festival annually.

“We have been working on a new edition at the DGA to celebrate the return of audiences in theaters and offer the experience of real film and TV premieres in Hollywood for the French industry,” says Jean-Noël Tronc, FACF president and SACEM CEO. “We are very confident that we will be able to present the full festival experience in the fall, complete with red carpet arrivals and screenings with a real audience, thanks to the continuing improvements in public health and safety in California, while maximizing our chances to invite an artistic delegation from France.”

This year’s program will be announced on Monday, October 11 at COLCOA.org. Beginning Wednesday, October 13, WGAW members in good standing may RSVP online only for festival events for free by using the code EIFFEL25 and the link that will be posted in the COLCOA entry on the Guild calendar after the program has been announced. No walk-ins will be accepted. Opening night on November 1 will be invitation only. Some seats may become available before each show on site during the festival, even for screenings that are sold out online.

Under the Full Moon: Anatomy of the Werewolf Story

Mistakes We Made and How We Recovered: A Conversation About Resilience

Dead For A Dollar: Guild Screenings Q&A with Walter Hill