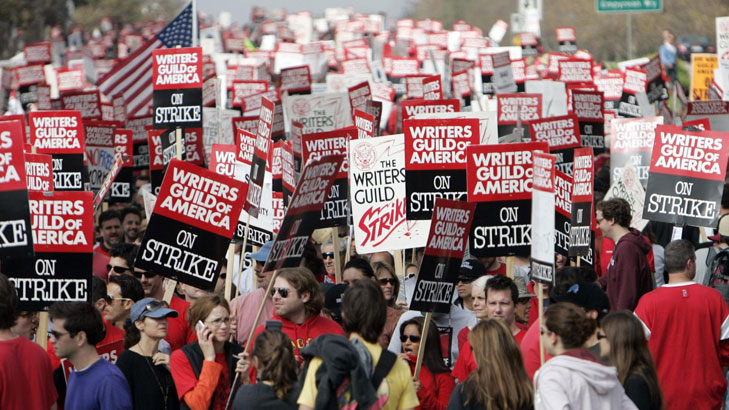 WGA members and their supporters rally during the 2007-08 writers strike.

“The essence of the Writers Guild’s history with strikes comes down to realizing that we, writers, are the thin edge of the wedge that leads the rest of the industry in terms of how people—employees, workers, contracted individuals—are treated.” Patric M. Verrone, WGAW President, 2005-2009

On February 12, 2008, then-WGAW President Patric M. Verrone announced that over 92% of Guild membership voted to bring the 100-day writers strike to an end. Writers gained coverage of content made for new media—as it was considered at the time—and residuals for reuse on new media platforms, including digital downloads and use on ad-supported services. A hard-fought gain, the value of which was uncertain in 2008, has proven to be foundational to the entire industry.

Though it had been nearly 20 years since writers had been on strike, the issues at the core of the campaign were not new.

Since its beginnings in the early 1900s, the entertainment industry has been consistently impacted and disrupted by technological advancements—from the advent of television in the 1940s to home video in the ‘80s, up to the streaming wars of today. Every leap in technology expanded markets and company profits, leading writers to perennially fight for new industry standards and their fair share of the wealth they create.

To wit, in 1960, the first strike in WGA history, writers won the right to a share of the studios’ revenue when movies were leased or sold to broadcast television.

In 1973, writers struck for a “guaranteed share for writers in the area of ‘supplemental markets’—pay TV, cable TV and cassettes.” 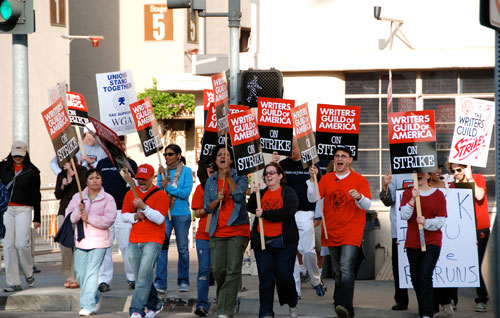 Striking WGA members and their supporters picket in front of Warner Bros. Studios in Burbank on Nov. 6, 2007. Photo by Ron Tammariello.

Strikes in the 1980s were conducted to try to deal with the emerging home video after-market. On October 25, 2007, negotiations broke down over jurisdiction and new media, triggering the strike.

The 2007-08 strike was prescient in anticipating the dominance of today’s streaming market while the technology was still in its infancy. In preparing for contract negotiations, Guild leadership looked at past bargaining cycles and noticed a pattern that whenever a new medium for content was introduced, it would negatively impact writer compensation for the reuse of their work.

“We were able to communicate to our membership that something was coming—we didn’t have the foresight to say it will be subscription or ad-based or pay-as-you-go, we just knew the industry was going to do something to make a lot of money with it,” Verrone said. “The ‘fool me once, shame on you’ adage? Forget fool me twice, this was fool me the fourth time.”

The jurisdiction over new media that writers won in the 2007-08 strike was precedent-setting for the industry, establishing the groundwork to bargain over the use of streaming content years before the technology took hold of the distribution pipeline. The Guild built on this by negotiating minimums for streaming shows on High Budget Subscription Video On Demand (HB-SVOD), in 2014; increased residuals for programs made for HB-SVOD, the first ever foreign new media residual, and increased residuals for first-year Ad-based Video On Demand (AVOD) streaming, in 2017; and improvements to initial compensation and residuals for High Budget and Low Budget SVOD programs, in 2020.

See the History of WGA Contract Negotiations and Gains to learn more about the evolution of the MBA. And see the Written By story, “Strike Captains Courageous,” for a look back at 2007-2008 strike captains holding the line.

Thrice Upon a Time: Working with Fairy Tales

Treat Yo Self: Self-Care for Writers