When I first transitioned from being an actor to being a writer (a million and nine years ago now), the biggest challenge for me was creating a systematic “practice” for my work. Dialogue came easy. Same with emotional structure. And once my fingers were moving, I was pretty much good to go. That said, getting those fingers moving…overcoming the fear of failure and rejection and stagnation…was totally overwhelming (no duh, right?).

And then when it came to REWRITING, I was twice as paralyzed, because I’d already built something that made some sort of sense to me and now—knowing that something was in need of improvement—I had to summon the fortitude to go back into “demolition mode” in the hopes of, maybe, putting it back together again…but this time, better.

For the first decade of my career, I’d write a draft, get feedback, then stop cold—for days, weeks, sometimes months—trying to find enough faith to just type anything. And when this creative caesura morphed into a full-on malaise, panic would set in because…DEADLINES. People were waiting on me. I was absolutely that writer telling producers, “It’s going so GREAT,” when I hadn’t written a thing.

Fast forward to the end of last year, when an online Twitter discussion turned to strategies for responding to notes and I was surprised to realize two things: one, in the second decade of my career I’d (mostly accidentally) stumbled upon a process that relieved my terror…and two, people seemed fairly interested in that process. 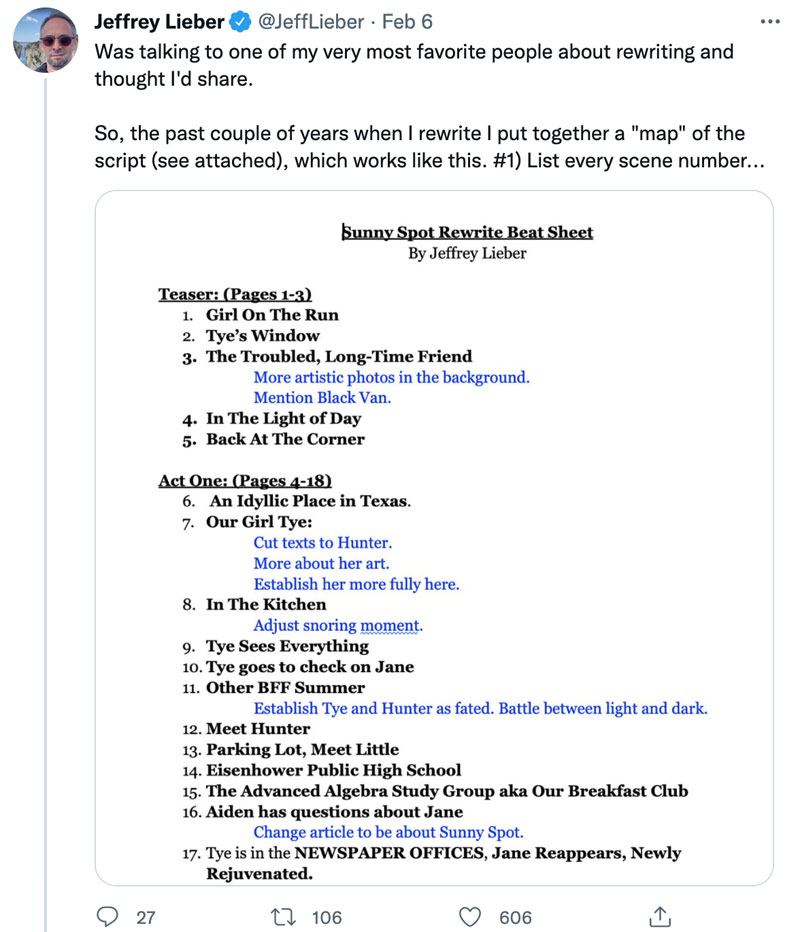 I refer to the above as a “rewrite map,” which I’m absolutely not suggesting is rocket science, or brain surgery, or attempting to parent stable, emotionally balanced children, but it has made my artistic life a lot less stressful, and so I (humbly) share it in the hopes that it might, perhaps, work for others. It goes a little like this…

#1: After I get notes, I open the draft and make a numbered list of all the scenes, titling each with the intended emotional/plot purpose. “Carrie discovers the secret that changes her life.”/“We see the space station and it’s terrifying.”/”Our couple fully realizes…being in love is a lot harder than it looks.”

This scene list does a couple of things. First, it forces me to REREAD the script. Not a granular reread; not getting lost in dialogue or “is this the best image for the moment,” but big-picture stuff. Structure. Intent. Plot. This list also quickly reminds me of what I thought the purpose of each scene was…and then if I run across a scene (or two, or three, or nine) that I’m unable to simply and quickly label, well…those scenes probably disappear in the next draft.

#2: I sit with my notes and scene list and try to identify which notes get addressed in which scenes. So, if the note is, “Character A’s drive is unmotivated,” I cruise through my map and figure out where I’m going to rectify that. This scene in act one. These two scenes in act two. This scene in act four. I’ll go systematically through all the notes until each scene in my rewrite map has either a black “stet” or a plan in blue text: “Character A goes to care for her ailing brother; realizes she’ll die alone if she doesn’t get out of this @#!@#!# town. She calls her boss and quits the only job she’s ever had and buys three tickets for Saturn.” I try to stay in this list-making mode until I'm pretty sure I've addressed all the notes.

#3: I begin with the EASIEST fixes, changing all those blue revision suggestions to strikethrough when I finish. Typos. Name changes. Simple fact adjustments. No note is too small to get added to the map and then get crossed out when accomplished, because the purpose is to trick my brain into seeing progress…and calm my anxiety. This step is mostly about self-care and quieting a less-than-secure psyche. Things are happening. The list is getting shorter and…hey…I’ve yet to do anything scary yet.

#4: When it’s time to attack the big stuff (which I again take one note at a time), I stay on the path. There’s no guesswork. I’m just following directions that I’ve laid out for myself. Turn here. Double back there. Stay on this road (objective path/emotional character state/clue path) for six more scenes, until I arrive at the bridge from one idea to the next. And if I ever get lost—or more often, stuck—I close the script and go back to remapping, because, for me at least, creating more revision stars is the road to madness. Like before, changes stay blue until they’re accomplished, then are made strikethrough once completed.

#5: Complete the draft. Hand it in. Save the map. Wait for notes and then…do the same process with the next rewrite, adapting the basic map with a fresh reread of the script, checking to make sure that my scene descriptors are still accurate and primal.

Now, I still get lost…all the time. Seeing what’s broken is (now) pretty easy, but knowing what the BEST, least iterative, most emotionally connective line is that will pull the whole thing together…that’s still an elusive magic that I won’t possibly hope to codify. But at least the emotional panic and terror is gone. Or mostly gone…