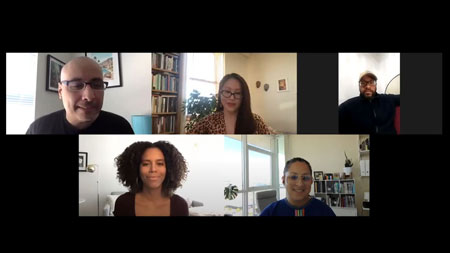 As we work toward a more inclusive industry—one that produces content reflective of the actual world around us—accurate portrayal of historically underrepresented communities has become fundamental to the work of all writers.

Last month, the Writers Guild Foundation and Storyline Partners co-presented a virtual panel that addressed these issues, and offered some solutions writers can keep in mind when including Latinx characters in their scripts, with one major takeaway: Hire Latinx people to write their own stories, or hire them to work with you to get these characters and their cultural nuances right.

“We are about 18–19% of the population, and yet we’re hired at some of the lowest rates in writers’ rooms, as actors, as directors, executives, and other creatives. It seems that Hollywood has not gotten the memo. We are here to have a discussion about that representation, and how to do it correctly, and thoughtfully,” said moderator WGAW Latinx Writers Committee Vice Chair Jorge Rivera at the start of the event.

“We, as Latino folks, are struggling to have representation in front of the camera, behind the camera, on all these different levels, in the writers’ room…. So not only are we struggling for that representation, but often when we get there, the nuances of our cultures become this one big soup for most people who don’t come from these cultures,” Rivera explained.

“I know as a writer, in different situations I’ve been in, I’ve been asked to speak for cultures that are outside of my own. Yes, I’m Latinx, but I’m not Cuban, I’m not Mexican, I am Puerto Rican.”

Sofie Khan, a Latinx Muslim writer-actor who grew up in a Catholic and Muslim household in a Black and Puerto Rican neighborhood in Chicago, spoke about balancing cultural specificity and commonalities, in the diverse Latinx community.

“Growing up in a Black and Puerto Rican neighborhood, my Latinx experience was really more pan-Latinx because it wasn’t just Puerto Rican…it’s mixed. I found myself at that intersection having to try to unify. I remember being in college trying to do everything I could to unify all of the college students [who identified as] Latinx, [getting] everyone to rally around certain things we needed as a group.”

A 2017 study found that the majority of Latinx Muslims identify as Mexican (31%) and Puerto Rican (22%), Rivera said, making Latinx Muslims the fastest-growing demographic of Muslims in the U.S.

Dr. Junyoung Verónica Kim, who is Asian-Latinx, grew up in an immigrant neighborhood between Seoul, South Korea and Buenos Aires, Argentina. She came to the U.S. as an undergraduate. “The question I always ask is, ‘Why are Asian-Latinx always seen as a surprise?’” Kim said, going on to voice one of the questions she often has to confront: “Why do you look Asian and speak Spanish?”

In other words, why is an Asian person speaking Spanish a surprise, “but an Asian-looking face and body that speaks English is not a surprise?”

Why is it important to get this representation right? “We, as humans on this earth, have an ethical responsibility to be accountable to the histories and lived experiences of communities and peoples that have been marginalized, oppressed, and erased in the Americas for over 500 years,” Kim said.

When people ask an Asian person where their parents or grandparents are from, the assumption is that Asians have only recently arrived in the Americas: the stereotype of the “eternal foreigner.” While many assume the U.S. is the primary destination country for immigration and immigrants, the U.S. actually accounts for less than 2% of migration worldwide, Kim noted.

In a presentation about the history of Asian migration to Latin America, Kim said it began in the 16th century, mostly of Filipinos to Mexico. Asian immigration peaked in the 19th and 20th centuries with the Chinese and South Asian “coolie” slave trade. After the “abolition” of U.S. slavery, the Americas started importing “indentured laborers” from East and South Asia. During the Mexican Revolution, about half of the Chinese population were killed in the Torreon Massacre of 1911, and during WWII, Latin American nations deported thousands of Japanese people (many of whom were citizens) to internment camps in the U.S. After the war, some internees returned to Latin America while several hundred remained in the United States as undocumented “immigrants,” only recently receiving partial reparations after being excluded from the Civil Liberties Act of 1988.

Kim said that U.S. racial and ethnic categories separate “Asian” from “Latino/a/e/x,” as if they are mutually exclusive. The “Latin Look” in Hollywood is “white with flavor,” such as Jennifer Lopez or Marc Anthony, and the industry often doesn’t know what to do with somebody who identifies as Asian Latinx.

“Are Latin Americans of Asian descent Latinx or Asian American?” Kim said, speaking to the rhetorical. She noted that the question, “Do you feel more Asian or do you feel more Latina?” wouldn’t be asked if she were of Spanish descent, because being Spanish doesn’t negate a LatinX identity, but furthers it.

Amilcar Priestley—an attorney, civil rights activist, cultural promoter, and director of the AfroLatin@ Project—referenced a Q Center study which revealed that “the number of self-identifying AfroLatinos in the U.S. jumped between 2010 and 2020, from 2.5% to 12.5%.” Priestley attributes that jump to consciousness-raising, and said the AfroLatina Festival was born out of a need to highlight the contributions of people of African descent from Latin America and the Caribbean. He stated there has been significant passive and active underrepresentation of AfroLatinos.

“There are approximately 125 million Black people in Latin America,” Priestley said. “The erasure is such a falsity.”

Grasie Mercedes, an AfroLatina writer and actor, wasn’t the only person of color in her first writers’ room, but she was the only Latinx person, and was seen by others as a Black writer.

Kim’s reference to the “Latin Look” resonated with Mercedes as well: “I’ve been acting for 13 years and only in the last year have I been out for a role for a Dominican part, for an AfroLatina, that they eventually gave to a white Latina, so that can be very frustrating.”

Mercedes’ current role on Grand Crew (created by Phil Augusta Jackson) was written as a Black woman who was not specifically AfroLatina. However, once she brought it up to Jackson, he promised that they would explore that with the character if they got picked up for a second season. And they did. The day of the panel.

“So there’s hope out there!” Mercedes said, pointing out that Jackson acknowledged that the AfroLatina Black experience is different than the African American Black experience.

When it comes to pushing for accurate representation on screen, Mercedes said that while it’s clearly important for the non-Latinx person to be willing to listen and educate themselves, it’s also important, as the Latinx person, to be willing to be an open book and share life stories. Too, she noted that it’s not only white people who “don’t get it;” it’s a problem all around.

“We don’t expect people of other ethnicities and races to speak the language where they come from, but for some reason in the Latin community it’s like, if you don’t speak Spanish you’re suddenly not Latinx,” Mercedes said.

Within the U.S., Spanish has become the modicum of how to identify Latinx people, which is why the language has become “completely racialized,” Kim said.

“Even in a country like Mexico—and I say Mexico because that is a country that people are most familiar with in the U.S.—we are speaking about more than 500 indigenous languages spoken on a daily basis,” Kim noted. “We’re speaking about millions of populations of indigenous peoples not counted within the Mexican nation, and of course not within a Latinx identity.”

To this point, Priestley referenced the perceived hierarchy within the U.S. of certain Latinos over others, based on geography, which may be partly due to the fact that a lot of Spanish-language television comes from three major Latin American distributors. So how do we rectify the bias we sometimes have against each other from our own communities, he wonders?

“I don’t think the Latin community always steps up and comes out and supports the way they should because of this feeling of, well that’s not my Latinx story. If we keep telling these stories about the same type of families and the same type of stories, people are feeling left out,” Mercedes says.

“Some of the people who are in the creative decision-making workflow may find something surprising and not believable because it’s outside the realm of their understanding of the culture,” Rivera said. “Staying open to those very specific and nuanced experiences when they come up is the thing that adds authenticity and creative energy to stories…

“There are not enough executives with decision-making power within the TV and film industry who come from marginalized groups; not just the Latino experience but across the board from all ethnicities and experiences,” Rivera said.

In addition to having the opportunity to tell Latinx stories on screen, the types of stories that get told matter as well. “Look at the narratives. We don’t always have to have the painful stories. We want to have a mixture of the futuristic, and the sci-fi, and the romance, and comedy, and nonsense,” Priestley said. “But also, don’t be afraid of our history. It is what it is. Are we just going to skip over the last 100 years because we’re tired of talking about it? Especially in the Latin American context where it’s not talked about.”

“Not every show is going to do everything perfectly, and we’re going to make some mistakes along the way,” Rivera said. “But I think in the long run, we need to uplift each other and support each other as much as possible, because the more stuff gets made, the more variety of things will get made, and eventually, hopefully, more and more of these subcultures within our culture will get represented.”

So, how to get Latino/a/x/e representation right?

“My number one advice is to hire a Latine/Latinx person to do that, or to do that with you,” Rivera said. “We are out here, we want to be hired, we want to write, we are talented, and we’re dying to work, so hire us.”

Thrice Upon a Time: Working with Fairy Tales

Treat Yo Self: Self-Care for Writers