Periodically I like to take a look at the landscape of external portable drives. Yes, I know that people aren’t hitting the road all that much these days, so “portable” holds less cachet at the moment than usual, but it’s always good to keep apprised of such things down the line. But then, external portable drives have benefits beyond just being able to load up files if you travel for business or go on film location. They’re also helpful, for instance, for backing up the hard drive from your main computer on a weekly basis—alternating with different drives each week to protect against accidentally backing up a virus. Or keeping an archive of your largest files, notably photos and music. Or tossing an external drive in a briefcase or backpack to transfer documents between home and whatever your destination is. (I originally wrote “…and office,” though that seems a quaint concept at the moment.) While portable flash drives can fit the bill for some of that, as well, capacity is substantially less.

In the past, when I’ve looked at external portable drives, it’s been hard drives since SSDs (solid state drives) were so prohibitively expensive. They still cost notably more, but the price over the years has plummeted to a reasonable price, making them very viable options if their benefits fit your needs. And their benefits are significant—notably that they can be blisteringly fast, are extremely light and are shock resistant, having no hard drive that can break if dropped.

I’m going to be a bit uncommon this month and jump right at the beginning directly to my summary thoughts about the SanDisk Extreme Portable SSD rather than first go into the reasons for those conclusions. I’ll get to the details after—that’s because the details are the minutiae of statistics which risks boring the bejeepers out of most people. But after hearing about the product, anyone interested in getting under the hood is welcome to continue on. 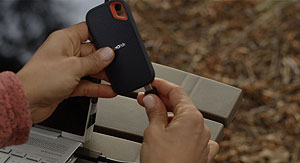 The Extreme Portable SSD is not for everyone’s needs. But if it is, it’s absolutely wonderful. What’s remarkable is how small and light it is, almost to the point of a joke when comparing it to the portability of standard portable external hard drives. I have a light, portable Seagate hard drive that weighs only six ounces—but the SanDisk is a quarter of that, just 1.5 ounces. It’s like a feather. And tiny—not much bigger than the remote control that comes with a clock radio. It fits comfortably in your shirt pocket, and you almost won’t know it’s there. About the length of your index finger, 4”x2”x.5”. So, if you’re looking first and foremost for something truly, deeply portable, this is it.

It’s also incredibly fast, with a read speed rating of 550 MB/sec—by comparison, a portable external hard drive like another one I have from Western Digital will have a read speed of around 110 MB/sec. However, there is a major caveat here. Drives are generally configured for either small files (like documents) or large files (such as high-resolution photos, videos and music). The SanDisk is configured for the latter. If you mainly transfer document files or other small-sized files, you’ll still get a speed increase from the Extreme Portable SSD, just not a significant one, which probably isn’t worth the price. (There were also some weird inconsistencies in speed that I noticed when transferring the small, document files—more on that below.) But if you’re mostly transferring large files, the time you’ll save is huge.

This brings up one other caveat. It will seem a bit techno-babble, but it’s important, so I’ll do my best to be clear. Every computer has USB ports into which you plug peripheral devices with USB cables. The Extreme Portable SSD is a peripheral device that uses what’s called the USB 3.1 protocol. This is the updated standard from the normal USB 2.0 that many, if not most people still use for the USB ports on their computer. USB 3.1 is extremely fast, but after five years or so it still hasn’t caught on fully as The Unqualified Standard, so not everyone’s system can’t take advantage of its speed jump. The good news is that it’s backwards compatible, so even if you still have a computer with older USB 2.0 ports, it can run a USB 3.1 device (like this is) with no trouble, but you’ll only get the normal 2.0 speed. That means that the speed benefits I just described above are much less, bordering on non-existent. 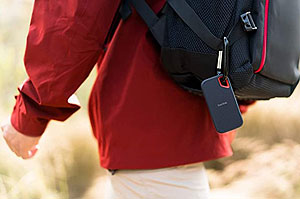 To be clear, even if you are unable to use the SanDisk at its full USB 3.1 capability, you might still like it for its tiny size and feather-light weight. But the speed will be largely the same as any regular external USB 2.0 hard drive.

Which is where price comes in. As I said, in its early days, SSD drives were prohibitively expensive, only for power users. But now they are within competitive reach of almost everyone, just at the high end of “competitive.” For comparison’s sake, the aforementioned Western Digital portable external hard drive will cost $50 for a 1-terabyte unit, and $60 for a 2-terabyte device. And a Seagate 5-terabyte drive is $105. On the other hand, at the time of writing, this 1-terabyte SanDisk Extreme SSD tested here can be found at $160. (The 2 terabyte model, though, is a more substantial $300.) However, you can get a 500 GB unit—which is a lot of capacity for most people—for just $88.

Again, it does cost more. And if you mainly transfer small files or don’t have a USB 3.1 system, then the SanDisk Extreme SSD is not the best option. (Unless portability is the driving issue for you.) But if you mostly deal with music files or photos are other big files and have USB 3.1 capability, this is a wonderful device. 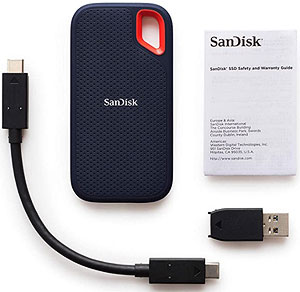 It comes with a USB type-C connector cable, but the box includes a small adapter for standard USB-A ports. And in addition to being shock resistant up to 1,500 G, it is water-resistant for up to three minutes.

That’s the summary. Now for the geek minutiae, for those interested. There are a few oddities worth noting, and this is mostly about how I got to the results I did and reached those conclusions—along with what those results specifically are.

I didn’t do benchmark tests in a lab, as is common when checking speeds, but instead did my testing in a “real world” sense, like one might do at home, transferring a wide variety of files on three different devices and comparing the results. The control device was, of course, the SanDisk Extreme SSD using its USB 3.1 connection. However, I also ran the tests with the very same SanDisk SSD device but using a more common and basic USB 2.0 cable. And finally, I ran the same tests with a Seagate Free Agent external hard drive that has the basic USB 2.0 connection, as well. Not to see which would be faster, that was a given, but how significant the differences would be. And also to see if the SanDisk Extreme SSD with USB 2.0 would be different from a standard external hard drive with USB 2.0.

As for the files tested, I used a combination of large and small.

The largest files individually that I transferred were audio. The Music folder had 7,032 files in it, and because each file was so big, the folder was 38.3 gigabytes.

Photo files were the next largest. The Photographs folder was made up of 2,352 files and held 4.37 gigabytes.

Document files were the smallest. While the My Documents folder held a large collection of files—6,334 in all—because each one was relatively small, the entire folder was just 2.73 gigabytes.

Finally, I transferred a Windows.iso file. This is a huge single archive file that’s basically an image of data on your hard drive. The one file was 3.85 gigabytes.

First things first—the two devices using USB 2.0 delivered near identical results with large files, so being SSD or a hard drive didn’t make all that much a difference for those. (How “near identical”? Each time, the Music folder took over a half-hour to transfer, and yet there was only a 5-second difference!) However, a slight difference occurred with the smaller document files. The Documents folder took 9:11 to transfer on the Seagate hard drive, but only about 6:45 using the SanDisk Extreme SSD with USB 2.0.

The numbers though were striking when comparing these results to the SanDisk Extreme SSD with the USB 3.1 cable. And the biggest differences were with large-sized files. To be clear, there was also a solid difference with smaller document files, but it wasn’t as substantial as seen with large files.

First though, a quick side note: while test results for transferring files to the SanDisk Extreme SSD with USB 3.1 were pretty consistent with large files, times were all over the place with the small document files. Most were generally within the same range, but a few diverged noticeably—and the very first test was weirdly slow. Subsequent tests, though, zipped, some notably so. That’s why I did many tests of the small document files, to find some sort of consistency.

(Here’s what I mean: that first test transferring the Document folder took a whopping 12:38—but after that, eight other tests took between only 2:54 and 5:30. However, four other tests jumped to between about 6:00 and 8:40. With so many small files, I can sort of understand the times differences of the subsequent 12 tests, which—though different—were mostly within a reasonable range. That first sluggish result thought was totally strange. Oddly, the same thing happened with the SanDisk when I tested the Document folder with USB 2.0. The first run was much slower, taking 9:32, but then two subsequent tests dropped way down to around 6:30 for both. Who knows? Maybe it takes one run to adjust itself to small files.)

So, creating a very simplified chart of generally average transfer times for the SanDisk Extreme SSD USB 3.1 and the two USB 2.0 devices, we come up with—