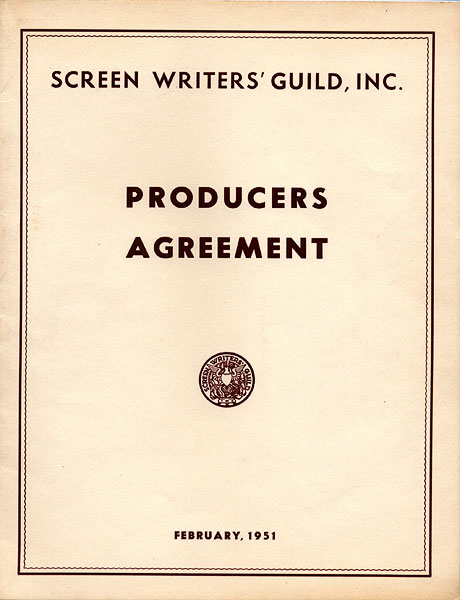 The history of the Writers Guild of America is one of a continuous struggle to expand and defend the creative rights and compensation of writers. Changes in the entertainment industry, often driven by technological change, have presented each generation of union members with new challenges and opportunities in pursuit of that goal. With unity, we have advanced these creative rights and compensation provisions over eight decades.

1941 – The Screen Writers Guild (SWG), a predecessor of the Writers Guild of America West, reached its first negotiated contract with the studios. The historic agreement guaranteed writer control of screen credits through the Guild, written contracts, dispute arbitration, and minimum compensation.

1953 – The SWG struck the Alliance of Television Film Producers (ATFP) for 13 weeks. Gains included the first residuals for reuse of made for television product, with payments for up to five reruns; separation of rights in television (a form of contractual copyright); sequel payments in television for creators of original works; a prohibition of speculative writing in television; control of credits in television; minimum compensation; and non-exclusive reversion of television rights.

1960 – The Writers Guild of America struck the ATFP for 22-weeks. Gains included the first residuals for theatrical motion pictures, paying 1.2% of the license fee when features were licensed to television; an independent pension plan; and a 4% residual for television reruns, domestic and foreign. Also, this groundbreaking contract established an independent pension fund and participation in an industry health insurance plan.

1966 – The 4% royalty in television was replaced with a return to fixed residuals, now covering both domestic and foreign reruns. The first provisions covering writer-producers in television were established.

1970 – The Guild combined the screen and TV agreements in a single Minimum Basic Agreement or, MBA. Domestic television residuals were extended to 10 reruns, an improvement over previous five rerun formula. The Guild also gained a provision allowing screenwriters to reacquire unproduced original material.

1973 – The Guild struck the Association of Motion Picture and Television Producers (AMPTP) for four months. Gains included the establishment of an independent health fund; 1.2% of distributor’s gross receipts on videocassette sales and pay television, anticipating the future emergence of these means of distribution; and additional provisions regulating the employments of writer-producers.

1977 – The Guild took a strike vote but agreement was reached without a strike. Gains included fixed residuals in syndication extended from ten reruns to perpetuity; the prohibition of morals clauses in writer contracts; and improvements in the right of writers to reacquire original material. 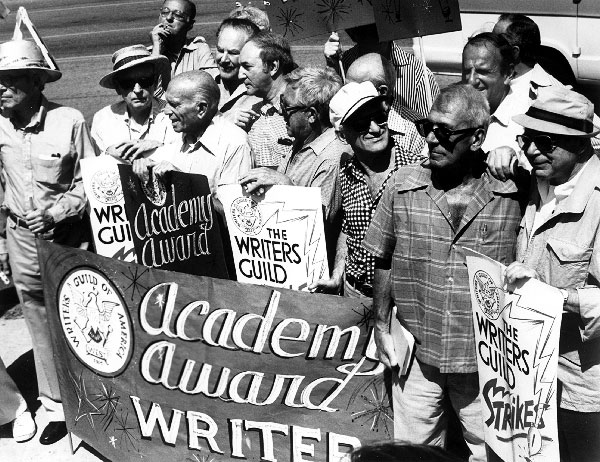 Oscar-winners on the picket line during the 1981 writers’ strike

1981 – The Guild struck for 13 weeks. Gains included terms for made-for-pay television programs. Terms for reuse of television programs on nascent basic cable channels were changed from fixed residuals to 1.2% of distributor’s gross receipts.

1982 – Hollywood’s major studios and independent production companies reconstituted the AMPTP as the Alliance of Motion Picture and Television Producers.

1985 – The Guild struck the AMPTP over the studio interpretation of the formula for paying home video residuals, which was at the time the subject on a legal arbitration. The DGA accepted the studio’s proposed formula and internal opposition to the strike within the WGA brought the work stoppage to an end after only two weeks. The Guild agreed to a formula for home video residuals based on 0.3% of distributors gross. 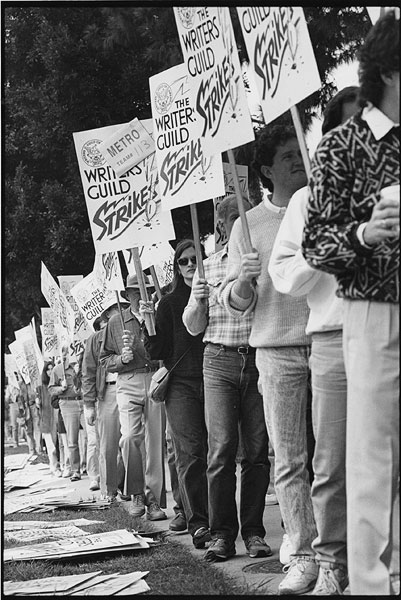 Writers on the picket line in 1988

1988 – The Guild struck the AMPTP for 22 weeks, the longest strike in its history. Gains included an increase in residuals for reuse of free television product on basic cable to 2.0% of the license fee; residuals negotiated for made-for-basic cable product; and improvements in creative rights for the writers of original screenplays and television movies. The Guild established with the AMPTP the Committee on the Professional Status of Writers to conduct talks about creative rights. Along with DGA and SAG, the Guild won agreement from the AMPTP to fund a tri-guild audit program, through which the guilds can assure that revenue-based residuals are paid correctly. The Guild agreed to discounts for syndication reuse of certain one-hour dramatic prime time network series.

1992 – The Guild won the right to divert increases to minimums to the health fund, but otherwise extended the 1988 agreement.

1995 – Residuals were negotiated for reuse of material in interactive works.

1998 – The Guild negotiated the right to move minimum increases to the health fund or from the health fund to minimums, as needed. Also, expedited arbitration methods were established for residuals and reacquisition cases and the Guild gained security interests in films and television programs for independent productions. Pension and health contributions were extended to purchases of literary material for features when at least one rewrite or polish is also part of the deal. A system of banking of health fund “points” was also established to extend coverage in periods between projects. Retiree health coverage for the “baby boom” generation was also pre-funded by the allocation of reserves for that purpose. Residuals for made-for-pay television programs were improved.

2000 – WGAW offered the first internet contract for writers, covering writers who work on made-for-Internet audiovisual programming, including live action animation. It included pension and health, separation of rights, and other Guild protections.

2001 – The Guild gained its first ever residual for internet use of films and television programs originally produced for another market, a 1.2% of license fee residual for Internet rentals, including subscription video on demand (SVOD). The cap was removed on foreign television residuals with the addition of a 1.2% residual on foreign revenues above certain revenue thresholds. Residuals for made-for-pay television and made-for-basic cable programs were increased. Residuals for reuse of all product on Fox Broadcasting Company were increased to network rates. A payment for the right to publish theatrical scripts on DVDs was established.

2004 – The employer contribution rate to the health plan was increased from 7.5% to 8.5%. Residuals for programs made for pay television were increased. 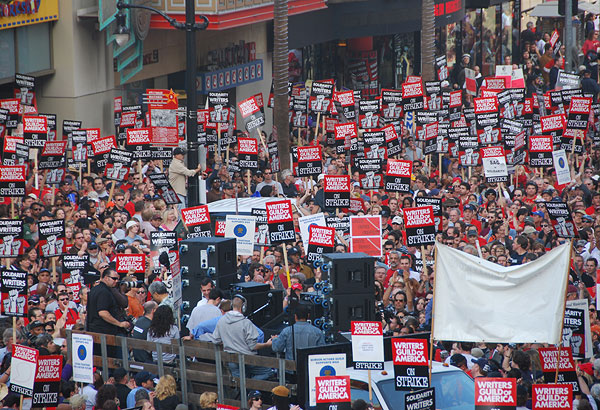 WGA members and supporters rally on Hollywood Blvd. during the 2007 writers’ strike

2007-'08 – The Guild struck the AMPTP for 100 days. Gains included MBA coverage of content made for new media; and residuals for reuse on new media platforms, including digital downloads and use on ad-supported internet services.

2011 – The employer contribution to the pension fund was increased from 6.0% to 8.5%. Residuals for programs made for pay television were increased.

2014 – The Guild negotiated minimums for streaming shows on High Budget SVOD (HB-SVOD). In addition to securing compensation standards, new minimums ensured adequate pension and health contributions for writers on all HB-SVOD programs. The Guild also negotiated a first-ever provision limiting the types of options and exclusivity provisions that can be negotiated with television writers.

2020 – The Guild secured the right to increase the pension contribution rate by 2.75% over the course of the 2020 MBA contract cycle. These increases to the pension rate are projected to result in an additional $117 million in contributions to the plan. The Guild secured a historic paid parental benefit to assist members with the birth of a new child, the adoption of a new child, or the placement of a foster child. This benefit will be funded by a new employer contribution of 0.5% of writers’ earnings and becomes available May 2, 2021. In addition, the Guild gained improvements to: most minimums, initial compensation and residuals for high- and low-budget SVOD programs, span protection, and options and exclusivity. The new writer discount and trainee wage were eliminated, two contract provisions which have contributed to lower compensation for writers from underrepresented groups.