The nonprofit works to eradicate harassment, discrimination, and abuse of power in the entertainment industry.

In October 2017, The Hollywood Commission formed with the goal of changing the power disparity and culture of abuse that pervades the entertainment industry. Led by Chair Anita Hill and Executive Director Malia Arrington, the commission partners with major industry organizations such as unions (including the WGAW), studios, television networks, streaming services, music companies, talent agencies, and trade associations. 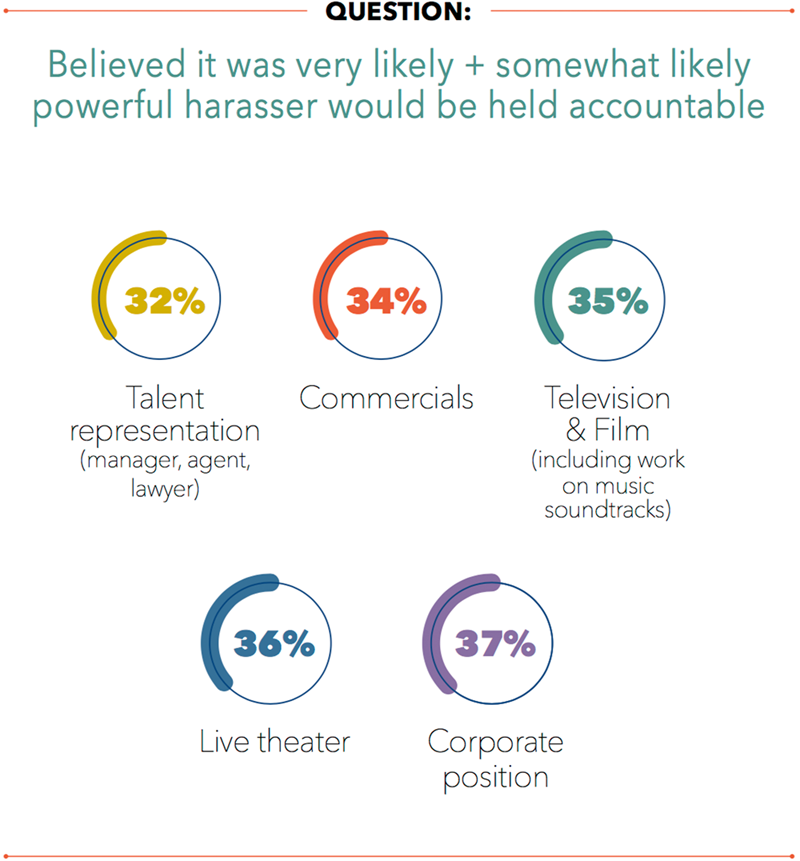 Only 35% of total respondents believed it was likely that a harasser would be held accountable. This chart shows responses by the respondent’s primary area of work.

This fall, the commission released a series of four reports on the experiences of entertainment industry workers with inappropriate, gender-based conduct. The reports are based on data gathered through a national, anonymous survey conducted online over a three-month period (Nov. 2019–Feb. 2020). A total of 9,630 people responded who self-identified as currently working, pursuing work, or having previously worked in the entertainment industry.

According to the Sept. 29 report on accountability, nearly 65 percent of respondents don’t believe that those in positions of power are held accountable for harassment. Workers cited a lack of trust that their reports would be taken seriously, combined with the threat of retaliation, as potential risks of reporting harassment. This finding spotlights why only 28 percent of respondents who experienced some form of sexual harassment reported the incident.

You can read the full report on Accountability here.

The second report, released on Oct. 7, focuses on bias, revealing a stark gap between the experiences and perceptions of straight, white, cisgender men and underrepresented groups, including women/non-binary people, people of color, LGBTQ+ people, and individuals with disabilities. For example, while 78 percent of white men see progress being made in welcoming and valuing diverse backgrounds, only 47 percent of Black women report seeing the same.

You can read the full report on Bias here.

The Oct. 14 report centered on bullying, a set of behaviors that can have a devastating influence on the emotional well-being of the victim or target of abuse. As Commission Chair Anita Hill stated, “Bullying may once have been an accepted norm, but in 2020 workers understand the harm that an environment rife with humiliating insults, sarcasm, swearing, and throwing objects in anger can cause. It’s time for Hollywood to commit to treating all workers with basic humanity and dignity.” The report also found that non-union workers were twice as likely to report bullying behaviors.

You can read the full report on Abusive Conduct here.

Earlier this week, on Oct. 27, the Commission released its fourth report covering the #MeToo movement and Sexual Harassment and Assault in the entertainment industry. The Hollywood Survey found that the overwhelming majority of sexually harassing conduct centered around some form of gender harassment, such as insulting, crude, and degrading comments and attitudes towards members of one gender. Unwanted sexual attention—sexual advances such as unwanted touching, hugging, stroking, and persistent requests for dates or sexual behavior despite discouragement—was the second most common form of sexual harassment. Sexual coercion, which refers to sexual advances when employment or career advancement is made contingent upon sexual cooperation, was third most common among respondents, with sexual assault—sexual contact without explicit consent—listed fourth.

You can read the full report on Sexual Harassment and Assault here.

The Commission will combine all four summary reports into a comprehensive report with recommendations and next steps to be released this December.

The Hollywood Commission has also announced that it will launch a new reporting platform tailored for the entertainment industry in early 2021—initially using a beta group that includes the WGAW and its members. The commission’s new platform will give workers who feel they have experienced sexual misconduct, discrimination, harassment, bullying, or microaggressions the ability to share their experiences anonymously, file immediate or conditional reports, and connect with other victims within the same organization anonymously. Members will soon receive more information about the reporting system and how to use it.