Panelists offer harrowing glimpse into life, and writing, amid devastation of Russian attacks. 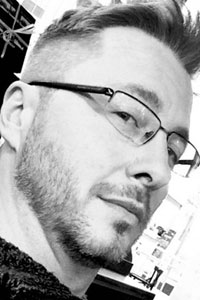 Vladimir Nagorny was raised in Sevastopol, Ukraine, a part of the Crimean Peninsula that Russia annexed in 2014. Nagorny studied film production and screenwriting at UCLA and ultimately returned home to work in Ukraine’s fledgling film industry. His credits include the 2017 screwball comedy DZIDZIO Kontrabas.

But in February, when Russian President Vladimir Putin unleashed a full-scale war on his country, Nagorny’s laptop became his rifle. As he put it, his weapon visible behind him in the Zoom room: “I’m a comedic screenwriter. I’m killing people, right?”

Now he personifies the Ukrainian spirit being broadcast to the world as the country defends itself against Russia’s onslaught. With it, Nagorny said, has come a cultural shift toward a stronger self-identity. “There is a trauma, and this trauma, in a way, is being healed by seeing Russians destroyed. And we have to let Ukrainians have that right now.”

Nagorny took part in the April 30th WGAW-sponsored virtual panel, “Meet Ukrainian Film and Television Writers,” along with Natalya Vorozhbyt, Olena Pshenychna, and Larysa Martseva, all of whom spoke through a translator. The panel was moderated by WGAW Board member Dailyn Rodriguez and WGAW member Adam Sigel, who has worked in Ukraine as a consulting producer, including on the 2019 Ukrainian TV series Routes of Destiny, a multi-character drama about the war in the Donbas region. 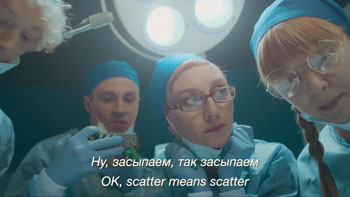 Storytelling matters: Russia’s war against Ukraine has also been a grinding war of ideas and Kremlin-backed disinformation campaigns. The writers on the panel have lived the stakes, as artists and citizens; what is happening now is a horrific escalation but not, at the same time, new. Nagorny calls the conflict “two civilizations clashing,” as in Soviet-style hegemony vs. a free society. Martseva reflected the national feeling when she said: “No one expected from us that we will provide and show such a resistance, that we will be an example for the whole world. We were not expecting that from ourselves.”

Martseva wrote for Routes of Destiny, and she has written for medical and detective series like Cop Wars. Kharkiv. Pshenychna was working as showrunner of Lusia, a Ukrainian adaptation of the CBS sitcom Carol’s Second Act. Vorozhbyt’s 2020 film Bad Roads, a quartet of stories set in the war-torn Dunbas region, was Ukraine’s entry for the 2022 Best International Feature Oscar. Production on her latest film was halted due to a bombardment in the town of Myrhorod. 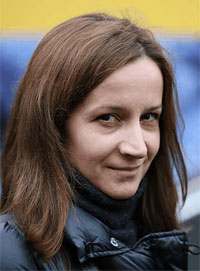 “Everybody understands in the cinema and TV industry that during the next year we won’t have any jobs. Because the State, when we win, will invest money into reconstruction, physical rebuilding of the cities, and not instantly into the culture,” Vorozhbyt said. “But it’s a nice time for us just to rethink and to prepare ourselves for the new challenges, for the new topics. The thing is, we’re all exhausted in working on this topic for eight years already. I was only working with this topic and that’s it; even when I was writing about peaceful time, I thought about it,” Vorozhbyt said.

She was speaking from Austria, where she is writing a new play as a fellow at the Institute for Human Sciences. As the panelists emphasized, war, as a subject, has been with them for eight years, whether in the form of enemies from without or within. In 2014, after Ukraine’s so-called Revolution of Dignity ousted then-president Viktor Yanukovych, a Russian-backed autocrat, generational, multi-ethnic freedoms survived. The future president, Volodymyr Zelenskyy, was starring in a popular political satire, Servant of the People (now available on Netflix).

If it seemed to outsiders that democracy would flower of its own accord, Russia has kept a secessionist war going in the Donbas region amid various other destabilizing pressure points. In 2019, Alina Polyakova of the Brookings Institution told a Congressional panel that “Russian state media, social media trolls, and bots” were undermining Ukrainian society with disinformation, like the claim that Ukrainian children were forced to play with stuffed Hitler dolls.

“Around us now, there are lots of painful points, lots of grief around us,” Pshenychna said, “but simultaneously around us there is so much love and so much light. For myself as a scriptwriter, I would like to tell the stories of this love and this light, which we feel now from each other and from the world here in Ukraine.”

As a writer, Pshenychna said, she gravitates toward comedy. When Russia began devastating Ukraine’s cities, comedy suddenly seemed senseless. “But living in this war more than eight years, and now when it is so painful and acute, I see and I know that if not for our warm, kind-hearted family sense of humor, inherent for Ukrainians, I don’t know how we could survive through those horrors.

“And rethinking that,” Pshenychna continued, “I understand that I would like to go on dealing with this warm, cool, Ukrainian comedy. It can help us, first of all, to overcome this pain we live now through, and on the other hand to show everybody all over the world what we are in real life. We are courageous, we are kind-hearted, we are peaceful, and we are really very optimistic.”

Near the end of the discussion, Martseva shared her story of escaping the violence. She lives near Bucha, a city much in the news due to the reported war crimes committed there by Russian soldiers. When the bombardments began, Martseva said, she invited friends in Kyiv to stay with her, thinking her village would be safer. Then the Russian tanks appeared in her backyard and the occupation began. Martseva went underground with two of her children and three dogs, living without food, heat, or electricity for 15 days. They ate dried bread that Martseva, for reasons beyond her, had been storing in her roof over the past year.

Escape for civilians was not an option. “The cars with white flags, and inscriptions saying ‘Children,’ were just shelled and shot,” she said. “Once I tried, but the woman with her two children was killed in the car in front of me.” On her fourth attempt, Martseva put saucepans on her kids’ heads as makeshift armor. They passed through three abandoned Russian checkpoints along what locals now call the “road of death.” Two hours later, friends who followed the same route out were shot and killed, she said.

During a brief Q&A, the panelists were asked what WGA members could do to help. They spoke of the ongoing need for professional mentoring. Nagorny, observing that Disney, Paramount, and Universal all have representatives in Moscow, urged investment in Ukraine’s film industry. So that “after the war, we can start bombing them with our media content.”

Futurism: Who is a Part of It?

Let’s Get Loud with the Creators of Roar: In Conversation with Carly Mensch and Liz Flahive

Where The Crawdads Sing: Guild Screenings Q&A with Lucy Alibar