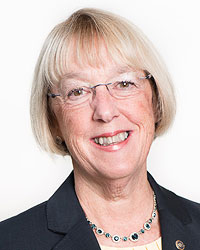 On Wednesday, June 30 the WGAW PAC held a virtual fundraising event for the US senator from Washington state, Patty Murray, cosponsor of the Protecting the Right to Organize (PRO) Act and chair of the US Senate Committee on Health, Education, Labor and Pensions.

“The work of this committee touches the heart and soul of the country. I’m honored to chair it and be part of writing critical legislation,” Senator Murray told the group. “The PRO Act hearing is in the next month. Right now, we’re working hard to get the last three Democrats to sign on.”

The PRO Act would return power to workers, reversing the decades-old assault on workers’ rights that has been perpetuated by existing labor laws and has resulted in unprecedented levels of inequality. It is one of a handful of bills and executive orders that the current administration has advanced to empower workers and break up monopolistic corporate power.

Part of one of the few remaining highly unionized industries in the country, Hollywood writers know well the benefits of working under a union contract and exerting their collective power to negotiate for fair wages and benefits, while fighting for workplace protections and pushing back against predatory employment practices. Once passed, the PRO Act will ensure that more working people are able to exercise their right to join together with their colleagues and improve their working conditions.

The outpouring of support from leaders in Washington DC, such as Murray, and the continuous organizing efforts of workers across industries are evidence of a resurging labor movement. While the Guild has supported similar bills in Congress over the years, with pro-worker majorities in Congress and leadership in the White House, the country may finally be ready for the PRO Act.