Writers and development execs share tips on pitching for OWAs at virtual panel. 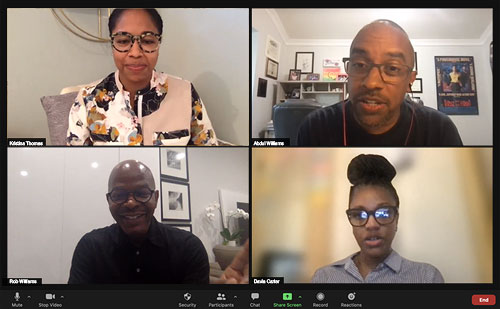 Even great writers may not necessarily be great “in the room,” as successfully pitching yourself for OWAs (Open Writing Assignments) requires a specific skill set that can be improved and perfected to increase your chances of getting hired on a project. Also, knowing the differences between pitching for an OWA’s existing project, versus an original idea, affects the way writers approach both the material and the meeting.

Presented by WGAW’s Writers Education Committee, the Guild’s recent virtual panel, “OWAs: How to Pitch Open Writing Assignments to Get Hired,” put a spotlight on pitching to land a job on an OWA. Because these projects are not based on a writer’s original idea, the pitch requires a few different elements that all writers should be familiar with. The conversation offered advice on a wide array of topics, including pre-meetings, communication with producers, and that all-important pitch deck. Panelists included writer Abdul Williams (The New Edition Story), Rob Williams (SVP, Theatrical Motion Pictures, Development and Production, Juvee Productions, Viola Davis’ production company), and Davia Carter (Director of Development, Kronicle Media), and the panel was moderated by writer Kristina Thomas (Demimonde).

The great thing about Open Writing Assignments is that they’re just that: open. The best idea can come from any of the people chosen to pitch their take on how to tell the story. Usually, up to five writers will be considered to share their unique vision for a piece of intellectual property that a producer or production company is interested in developing into a TV series or movie. The IP could be a magazine article, a novel, someone’s life story, or even an existing script that needs to be reworked. The writer with the angle on the story that captures the imagination best partners up with the producers to work on a pitch for a studio. A deep dive into all of this was offered up at the WGAW’s virtual panel.

Moderator Thomas set the tone for an honest conversation, sharing a relatable anecdote about her own perils with pitching. One of the elements of a good OWA pitch that came up early and often was first mentioned by Rob Williams, who urged writers to find “what about you connects you to this material.”

There’s often an individual pre-meeting before writers pitch their takes, and the time just after can be used wisely. Abdul Williams reminded writers how important it is to research, and to read whatever IP is connected to the project. Rob Williams recommended getting email addresses for the key players, and getting in touch to ask questions and stay engaged during the process. CC’ing your reps is always a good idea when reaching out.

Helpful pitching tips came from everyone. Abdul Williams recommends timing and recording your pitch while you practice, asking writers, “How does it sound to you? That’s how it’s going to sound to them.” Rob Williams likes to know how a writer sees the characters progressing through the story. Carter points to the collaborative nature of the writer’s relationship with producers. Once you’re working together, it’s best not to disregard their notes as you work on the pitch. Asking “Why?” about implementing a particular note is okay. Ignoring it completely is not.

Abdul Williams offered a helpful way to take some of the pressure off: Keep in mind that we’re always pitching. We’ve all told a friend or family member about a show we love that they haven’t seen yet. It’s that same energy about the world, the characters, and your passion when pitching to execs that will help carry the day and get them excited about your ideas.

Pitch decks are here to stay, and there was a lot of good advice on what makes for a great one. Carter likes how a well-executed deck can visually immerse the viewer into the world of the project. Imagery and tone are some aspects that are important to Rob Williams. A suggestion from Abdul Williams is that text be kept to a minimum when crafting a deck. The right visual elements should convey the flow of the story. The last image, like the end of your pitch, should be strong. If posing a question in the pitch, the last image should answer it.

Once you’ve got the job, development and deliverables of the project may sometimes be based on the writer’s individual process. Carter reminded everyone that at times, producers are also beholden to studio mandates and timelines.

When asked if going out to pitch OWAs is worth it, all three panelists agreed. Through this process, execs become familiar with your work, relationships are formed, and if you navigate the situation well, you’ll be on everyone’s radar for the next time.

Wondering what to do if you’re asked to leave or submit written materials by a producer or exec post-pitch? The short answer is: don’t do it. Read more about the Guild’s No Writing Left Behind member outreach educational campaign.

Eric Rudnick is a member of the Writers Education Committee.