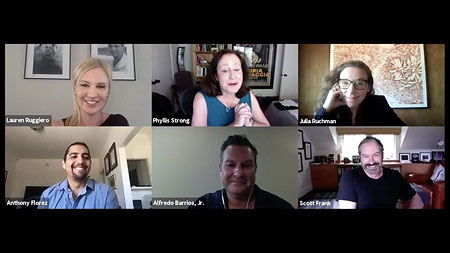 On July 29, the WGAW Genre Committee hosted the virtual panel “Westerns as a Genre of the 21st Century” to understand the world of Westerns today, with a spotlight on the question of representation and inclusion in a genre that historically traded in harmful stereotypes and tropes. Organizations such as the Think Tank for Inclusion and Equity (TTIE), which the WGAW recently partnered with to co-host a multi-part “Write Inclusion” panel series, are dedicated to educating the public about improving representation. But what does this mean in the context of Westerns as a genre?

It seems the first step in understanding how to make Westerns more inclusive is to understand how nuanced our relationships with these stories are. Anthony Florez (Deputy), co-chair of the Guild’s Native American & Indigenous Writers Committee (NAIWC), spoke about his personal relationship with Westerns and referenced a recent GQ story, “The Untold Stories of Wes Studi,” by Tommy Orange, to describe the complex relationship that Native writers have with the film Dances With Wolves (Screenplay by Michael Blake, based on his novel). In the beginning of the article, Orange writes:

“We went to see Dances With Wolves in the theater as a family. I don't know how many movies all of us went to together. That was maybe the only one. Native people playing Native people in a movie being shown in a movie theater? It was an event. This was 1990. I was eight. There'd been nothing close to that moment in my lifetime. We were used to Italian Americans playing crying Indians in anti-litter PSAs. Otherwise, I'd seen no Native people onscreen. After the movie, in the car, my dad, a Cheyenne man from Oklahoma who'd majored in Native American studies at Cal Berkeley, summed it up as ‘glamorized Indian history with white man hero.’ But at the time I was hungry to see any Native actors at all. You can't know what it's like unless you know what it's like, to want to see yourself in the world as badly as Native people do—we who, on top of being almost completely unrepresented, are misrepresented when we are represented. So what if Dances With Wolves made us the backdrop for the dominant culture's bearded-nice-guy-white-hero mythology? At least we were there, living and breathing onscreen, even laughing, even making jokes at Kevin Costner's expense, showing how we tease like we do. Make us villains, fine, but make us the toughest Pawnee anyone had ever seen.”

Florez shared, “I didn't grow up with Westerns, but the first Western I did see was Dances With Wolves….That was the first time we saw ourselves on screen, most of us, in any sort of light, historically or contemporary, and because of the humanization of our people in that film, regardless of what people think about the ‘white male fantasy’ of it all…we connected with those characters. My cousin and I, we dreamed of being the Natives at the end, who killed all the soldiers and were running into the river.”

Lauren Ruggiero (SVP, Scripted Original Series, Paramount Network) shared that in working with Yellowstone co-creator Taylor Sheridan on the upcoming prequel series, Y: 1883, a priority was to tell the “true story of frontierism and what it meant from all aspects, from…white families to Black families to immigrant families to women to Native Americans.”

Modern Westerns seem to be opening up to new perspectives. Alfredo Barrios, Jr. (Six) talked about “flipping the script,” stating, “I felt the need to kind of remake [the genre] in my own way, and kind of appropriate it in a way that was significant and personal to me.”

Although seeing ourselves on screen is often a cause for celebration, another concern that WGAW writers have is about the quality of representation their communities get on screen. Julia Ruchman, co-executive producer of The Son, described the efforts that her team made to more effectively represent Tejano and Native perspectives: “The show was incredibly fortunate to have a very close relationship with Comanche Nation,” collaborating closely with the Comanche Nation College President Juanita Pahdopony, who served as a liaison with the Comanche community. “Every time we needed any piece of advice—what the teepees looked like, what the paint on the horses should look like, all the little cultural details, and then, of course, the language, because a third of our cast was Native and spoke their lines in Comanche”—Pahdopony would seek advice from the tribe’s elders.

Interestingly, a side effect of this collaboration was that “the elders would have to get together and figure out how to actually translate [a line, a joke, a swear word] into Comanche and, sometimes, it was the first instance of them all getting together to do that,” Pahdopony says. Ruchman was told that there are now 20 episodes of scripts that contain translated and written Comanche that “doesn’t exist anywhere else in the world.”

Later in the conversation, Scott Frank (Godless) shared how he dedicated a year to watching and cataloguing every Western cliché and trope in an effort to “do them, but do them in a different way.” For example, he asked, “What if the prostitute was in love with another woman?” and, “What if it was about family, but it was about…the family you choose?” He added that one of the challenges was balancing being “period correct” without doing things that are “just no longer okay.”

Reflecting on why Westerns are “speaking to us” now, Barrios offered, “The Western often poses the question to us as the audience: Who are we as a country? Who are we as a people?”

Whether our work takes us back in time to an undeveloped California or into the future in outer space, this genre gives us unique opportunities to make statements about our values and our relationships with our communities, and we have new opportunities to update the narratives of who we are and always have been.

Watch the panel recording via the WGAW’s YouTube channel.