Writers explore how YA shows use genre to tell their stories. 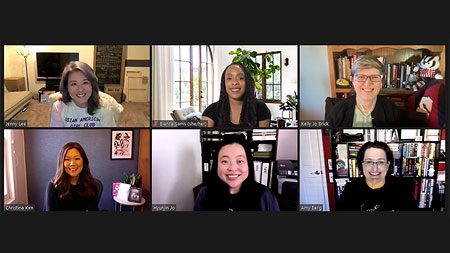 From shows like Warrior Nun and Shadow & Bone to Kung Fu and All American, genre is being used to tell a wide variety of YA stories. The WGAW Genre Committee recently brought together writers Amy Berg (Warrior Nun), Christina M. Kim (Kung Fu), Jenny Lee (Young and Hungry), Bianca Sams (Don’t Look Deeper), and moderator Hyunjin Jo for the virtual panel, “Young and Hungry: YA & Genre,” where together they examined not just the versatility of YA projects when it comes to the types of stories they can tell, but also the powerful concepts and themes these shows embrace.

The one thing panelists found most exciting about telling YA stories is that these younger characters offer so much to work with. Reflecting on her work in the first season of Warrior Nun, Amy Berg shared, “It was so much more fun than I’m used to writing in the adult space. I think a lot of it has to do with as we get older, our skin gets thicker and when you’re writing YA you get to lose a couple of those layers.”

Kung Fu showrunner Christina M. Kim compared YA to other series she’s been part of. “It’s fun to write for this age group because it is so much about people figuring out who they are. I also wrote for a lot of network dramas and procedurals and there you just don’t have the space in 42 minutes to really get to know those characters.”

With IP having such a strong influence these days, panelists admired the work that is being done in YA literature and how it’s helping to expand the representation we see on the screen. According to Jenny Lee, a YA author in addition to her television pursuits, “Young adult book publishing right now is booming. I’m happy to say that a lot of it is diverse content.”

Growing up, many of the panelists never saw shows that represented them. They had to place themselves into stories instead of seeing themselves through characters in TV and film. There is a welcome change that’s happening, especially when it comes to YA.

This shift is something that Bianca Sams has seen have an effect on her own family. “It’s really amazing to be able to watch my nieces watch Warrior Nun or some of these shows and really see themselves in a way that like, I watched those shows and could imagine myself in, but kind of had to watch from afar. Now I get to watch them watch this with the joy and the glee and the freedom that I didn’t get to have.”

Kim added, “A lot of times growing up you don’t know what’s missing, but as an adult, as a writer looking back on what informed your writing, what influenced you, it is astonishing. I’m hopeful that there are Asian American teens that are watching the show and can relate to our characters. I’m also trying to flip stereotypes as much as I can. I’ve got an amazing looking cast and romances and love triangles, so all the things that I didn’t have growing up.”

The YA space has opened up avenues for hitting on powerfully engaging topics like mental health. Movies and TV used to skirt around these issues, but now, YA shows are digging in and reaching audiences through the journeys of their characters.

In fact, the pilot of Kung Fu showed what Kim called “an extreme TV version of what many teens and young adults go through,” when the inciting incident for the show had the main character experience an epic meltdown due to mounting pressures to be successful, maintain the right relationship, and please her parents.

Sams related that in comparison to the shows she grew up watching. “Talking about things like cutting, eating disorders, bipolar, the fact that we can name them, that we can say them, that we can have conversations around them on TV seems so radical.”

With so many YA shows being a big draw for families to watch together, these shows often provide ways for families to have discussions that without these characters opening the door, would be incredibly difficult to ever get started.

How to Approach YA Stories

The writers offered tips when it comes to crafting these YA-centered stories. Reflect the current world, and in doing this, definitely don’t dumb down character experiences. Embrace these characters and how they can reflect society and real problems youth are having at this age. Whether it’s romantic relationships, family, peer pressure, or mental health, whatever the characters are struggling with, don’t be afraid to name it. Let the characters' voices be heard and let them identify what’s troubling them.

A big concern in building these stories is how to approach teen speak. There’s often a pressure to capture the latest phrases or pop culture moments, but the panelists caution against this due to how quickly trends in speech change and how long development can take. Berg recommended writers stay a little more universal with the language and lingo used in order to be able to stay current.

There are workarounds like Sams has used in her writing. “Nine times out of ten, we would just make up jargon, we would make up words that sounded cool, but had a certain cadence to it.”

For writers developing and pitching YA projects, there’s an ever-widening range of stories that can be told whether on the broadcast networks or with streamers. Common themes in these shows, no matter the genre, relate to identity, family, relationships, love triangles, and friendships.

Likability is a challenge that still pops up regularly with YA projects. Writers find themselves told repeatedly that girls need to be more likable and approachable. There is hope that this view is lessening. Lee referenced Never Have I Ever as a show that’s had success in showing that girls can get angry, just like boys.

Attendees raised a question about any barriers there might be for those who don’t have kids when it comes to pitching or staffing on these projects.

To this Berg responded, “I’d hate to think that’s true, but I’m sure it is. The point of writing is that you’re using your imagination, and we’re writing a genre show. Anyone at any age can access the memory of what it was like to be that age, so I think it’s ridiculous to think that we would prevent people from being able to tell stories about something everyone went through at some point or another.”

Showing how you relate to YA stories through your own life, or through family and friends, can also be helpful in getting past the “but you don’t have kids” objection.

This idea of making it personal is a real key in creating, selling, and staffing in YA as the themes and characters from YA stories can truly connect and engage with people.

Kim brought this insightful evening to a close with this thought: “What’s great that I’m seeing now with a lot of the writers that I hired is that they’re also writing really personal stories and I think they’re not censoring themselves in terms of what’s going to sell. Those are the writers that I’ve ended up hiring on staff, because those stories are the most original.”

Kelly Jo Brick is the vice chair of the Genre Committee.