One of the constant issues that people have with their Wi-Fi is not being able to get access throughout their home—the signal having to go through walls and up to the higher floors or down into the basement. Or just a weak signal in general. And so they get signal boosters and routers, and do their best to configure everything so that it works together. This month, we look at an elegant solution. And one that we’ll tell more as a story than traditional review, so that you can see the process I myself went through to resolve the issue.

In a previous life, getting Wi-Fi throughout my home wasn’t a huge issue. Though even there, I had some places where connection occasionally hit roadbumps. Then I moved five months ago, and the space expanded. Not long after I found some deadspots throughout the place where I wasn’t getting a good signal—or a signal at all, where it would come and go on a whim.

Happily, I had saved an article on home Wi-Fi written a year-and-a-half earlier by a good fellow who I know, Todd Haselton. (Todd is a significant expert at such things—he helped me out of another jam while overseas—and currently writes about tech for CNBC. So, when Todd writes about a subject you think you might be needing in the future, you save the article…) In it, he wrote about the problem of Wi-Fi connections through his home and how challenging it was. And when I saw that even Todd Haselton was challenged by the issue, I knew I didn’t stand a chance. Another warning bell to save the article. (By the way, you can read it here.)

The product that had been recommended to him by a friend was Google WiFi, which uses something called Mesh Networking. This differs from setting up signals boosts by using a series of hotspots in your home to sort of bounce signals off.

Not long after I moved, I had a Spectrum technician in my new place setting up the cable service. As long as he was there, I figured that I should ask him if he recommended any mesh or routing product for my Wi-Fi signal. Yes, I already had my Haselton-approved suggestion at the ready, but for all I knew there was a conflict between Spectrum and Google WiFi, or perhaps there was a product that was specifically configured to work with Spectrum. So, I wanted to be fully armed.

What the technician answered was—“I always tell my customers to get Google WiFi. It’s the best, by far.” Okay, well, that answered things.

He explained how easy it was to set up, which I wrote down and later followed his instructions, And while it was easy, he was wrong about one important thing. (Or I heard him wrong, though I did double-check to be sure I’d understood correctly.) I’ll explain –

You can buy Google WiFi in one of two configurations—either as a single unit for $99 (at the time of writing) or a three-pack for $259. What I was told is that you leave your existing Wi-Fi router in place and just add hotspots configured to it. Because of that, I only bought two single units to place around my home, figuring there was no need to get the three-pack and waste the third. It turns out this was incorrect. In fact, you replace your existing Wi-Fi router with one of the new Google WiFi pods, which meant I only had one extra unit to spare and would have to get an additional one—overpaying for it, had I gotten the three-pack in the first place. Before buying the third unit, though, I decided to test things out first to see if it actually was needed. More on that in a moment. First, I dove in to set up what I had on hand.

Before setting up your system, download the Google WiFi app. This is the heart of what makes configuring the device as reasonably simple as it is. The app walks you through each step screen-by-screen, using very clear and basic English (like, “What room are you setting up for this unit?”) and also tests your set-up along the way, not letting you jump to the next step until it knows everything is working properly thus far. 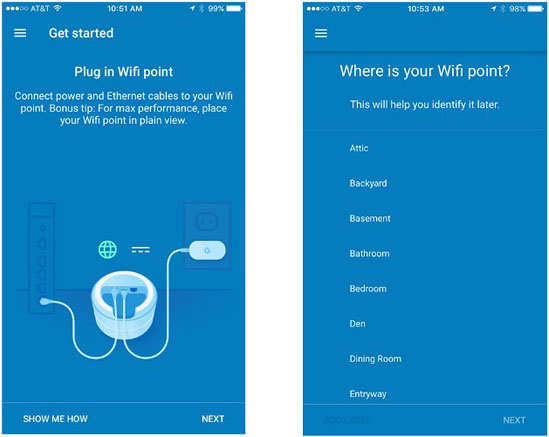 The first step with the hardware is to connect one of the pods (Google also calls them “pucks”) into your existing router. This lets the Google WiFi learn the settings on your system. After the app tests the various steps to make sure you’ve plugged everything in properly and are getting a signal, it then tells you to place any additional units around your home. 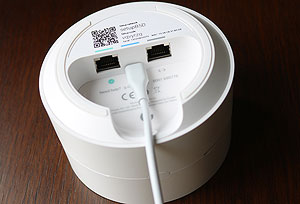 Know that you’ll have to come up with a new password. Rather than try to remember yet another one—hardly a terrible issue, I know, but still…—I just kept the old password and simply added a Google WiFi designation in front. The additional advantage to that is if, for whatever reason, I ever decide to go back to my former router (perhaps, for example, if the Google WiFi breaks), it lets me clearly keep the two passwords separate.

Okay, at this point, we’ve come to the “I screwed up and only have one extra unit, not the two I was expecting” part comes in. I had scoped out my layout before making my purchase and planned to put one of the pods in my kitchen, which would easily reach the living room—and then place the other pod in a closet that would cover my bedroom.

(Google recommends one pod for a home of 500-1,500 square feet. Two units for 1,500 to 3,000 square feet. And three of them for a large home of 3,000-4,500 square feet. By all rights, I should have been fine with just two pods, but because of the specific configuration of my layout and the various walls, I had wanted to be absolutely sure I was covered.)

As it happens, after four months of usage now, having only two units—one connected to my computer set-up and the other in the kitchen—has worked out just fine. I haven’t had any drops in connection, and everything has been well-covered. If I ever do see problems with the signal, though, I know that the process will be easy to just buy another single unit and add it using the walk-through instructions of the app. In a perfect world, I think I would have preferred getting the three-pack, even though (to be clear) I haven’t needed it. But for the extra $60, I’d have liked the comfort of knowing I’m absolutely fully covered—rather than discovering a problem later on and potentially having to pay another $100 for a single pod. That said, I don’t appear to need it and have saved the $60. Either way has its benefits (not wasting unnecessary money or having the security of total comfort) and it’s a personal choice. 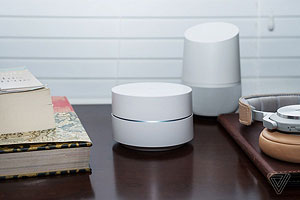 However many of the pucks you do have, just place them in the open where they have easy access to the Wi-Fi signal—higher is better—and you’re set. The units are designed with simple, clean lines so they shouldn’t be too much of a distraction to one’s decor.

And that’s pretty much it. If you want to go all techie, the app has a lot of features to play around with, including checking what devices are currently connected to WiFi, pause a device from having access to the Internet (great for parents, less great for kids…), finding your connection speed, remote control usage away from home and more. But you should probably feel fairly comfortable with never checking it again—hopefully.

In addition to the units themselves, Google WiFi comes with a power cable, Ethernet cable and information card, though you’ll mainly use the app for your information needs.

I can’t swear that Google WiFi will work as simply as this for everyone. A lot may depend on your home’s own layout, and perhaps even the strength of signal you get. But it’s a respectably-priced, reasonably-easy option for creating a mesh network in your residence to get WiFi coverage throughout.