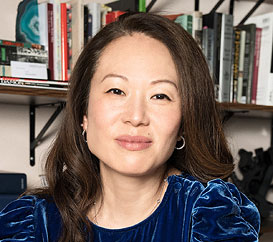 You get into this weird zone where you sort of split your psyche in half, where you have to push all the doubts into one bucket in the back of your psyche, because if you let that bucket just overwhelm you, I mean, for me at least, I wouldn't be able to do anything creative.

“History has failed us, but no matter,” reads the opening line of Min Jin Lee’s New York Times best seller Pachinko, asserting a wrong her novel seeks to right. The sweeping tale spanning four generations of a Korean family forced to live in colonialist Japan has now been adapted into an Apple TV+ series by Soo Hugh (Under the Dome and See). Slated as an ongoing series, the eight-episode first season begins in the early 20th century and centers on Sunja, the prized daughter of the kind of impoverished, but noble family history seems designed to leave behind. They are fighting for more than mere survival against odds as random and fundamentally disadvantageous as those set by the shiny metal balls shot through the quintessential Japanese gambling game.

Starring Minha Kim as young Sunja, Academy Award-winner Yuh-Jung Youn as older Sunja and Korean superstar Minho Lee as Hansu—the dashing, complex catalyst at the story’s center, the series has brought TV audiences to the people Lee says history has failed. Adapting the sprawling, beloved novel was daunting for Hugh, but also familiar—as the daughter of Korean immigrants, she grew up with intimate knowledge of the kind of suffering and perseverance Pachinko entails. Wrestling the nearly 500-page, century-spanning tome, presented challenges. While the novel is broken into three chronological parts, Hugh devised a new, two-track, time-hopping approach that unlocked the adaptation for the series format.

She spoke with the Writers Guild of America West website about her narrative approach, how her historical research provided the key to unlocking one of the novel’s most important and enigmatic characters, and how a $1.99 app helped her overcome doubt and a true dread of writing.

How early in your adaptation process did you arrive at this idea of creating two narrative tracks with the young Sunja and the old?

I read the book around December four years ago… I loved the book so much, and I wasn't sure how to do it, or whether I was right person to do it. It was about three months before it finally clicked. It’s like, Ah, this is the version I know how to tell. This is the version that I feel really excited and confident about. So about three months of thinking about it before it really cemented.

Min Jin Lee's novel is such great source material, which you obviously had reverence for; how daunted were you with the task of adapting and changing it? And, once you figured out how you were going to change it, did that relieve that stress?

You get into this weird zone where you sort of split your psyche in half, where you have to push all the doubts into one bucket in the back of your psyche, because if you let that bucket just overwhelm you, I mean, for me at least, I wouldn't be able to do anything creative. I would always be second guessing myself.

I’ve worked in TV enough to know that at some point doubt becomes your biggest enemy when you’re trying to do anything interesting or bold. The doubt’s always there though. I don’t want to lie and say that I’m strong enough to push it away completely. It’s always there. But once I realized this is how I wanted to do it—my version of it—I really just charged ahead.

Another huge change you made is the standalone flashback episode seven where you are writing your own backstory for Hansu and also introducing the real history of the Great Kantō Earthquake and the largely unknown slaughter of Koreans in its wake. Was that a decision you made concurrently with the two-track narrative structure or did that come later?

That came later, but it came before the writers’ room. I knew I wanted to do a departure episode, and as the research of the the Kantō Earthquake was starting to form in my head it was like, Oh, wow. It was such a shocking piece of history... I had not known about the earthquake or what happened to some of the Koreans afterwards, so once I got more and more into that research, it really became Hansu’s backstory for me.

When you fall in love with your characters—and the book is the foundation for these characters—you have to know them inside and out. You have to be able to talk about their biography, that they were born on this date, that this happened to them. With Hansu, he was the one figure that had had a huge blank spot in his resume... And unless he’s a miracle baby that’s born of no woman, well, he has to come from somewhere. So the Kantō Earthquake just made a lot of things make sense for me.

Was there a feeling, as a fan of the book, of wanting to close the circle on Hansu… not to justify his less flattering characteristics, but explain them…?

It’s just human nature. There’s no way someone thinks like Hansu, acts like Hansu—you’re not born that way, right? There’s no way that that kind of philosophy comes out of the womb. So you knew that for someone to embody those kinds of ideals and to be able to live in two different worlds and to be able to even consider having two different families, something happened to him. That just feels so obvious.

And then it’s just working your way backwards. So this is him in 1931. What happened in 1930, 1929, 1928? And as you go backwards in time, more and more of his story gets filled in, and that philosophy starts to make sense, because at age zero, he is a baby and innocent. And in some ways, what we want to say is that the world did this to him, right?

One thing I’m not sure as many people realize is that this is slated for four seasons, correct?

And that explains some of the missing bits from the book. You’ve withheld grist for the mill, so to speak, moving forward?

I just want to follow the rules of time. So, for example, there’s one character that's beloved by the readers of the book [Noa], and I love this character, but he hasn’t been born yet. Right? So, people are asking when am I going to get to this story? Well, how do you answer that? I just don’t know how to manipulate time that way, that someone could just appear not having been born? That character, we do watch his birth near the end of the season, and so that is what we have to look forward to going on—really following that story.

How did you walk the balance between the uplifting, sentimental components of the sweeping TV drama and the intricate and at times unanswerable heaviness of the book?

But the book was a beautiful balance of light and dark, just like life. That’s how life is, a shading. And in thinking about how to bring this adaptation, to me, the minute you bring words onto a visual medium, it becomes very clear how much you need to show. So [episode seven] is an example of this kind of thinking.

There’s a version where the camera could have been inside the barn, right? And we watched the horror [a scene in episode seven where Japanese vigilantes burn a barn with Koreans inside]. My question is, what do we get by watching it? Sometimes not showing things is just as powerful in a show like this, because showing sometimes too much, deadens us as well. So it’s that balance between wanting to be very explicit about things, but knowing that we don’t need to show too much, to explain too much... And I don’t think of sentimental as a bad thing for a show like this. I would say hopefully, in that sentimentality, we give our characters dignity.

You have a background in horror and that is sort of a principle, what is not seen is often more powerful… you applied that here, yes?

Yeah, absolutely… thank you for catching that because so much of the immigrant experience and so much of the experience of the Zainichi Korean in Japan is a horror story. There’s a group of people where history is a horror story. If you’re not in power and you are marginalized, you’re outsiders. That’s perfect. I think what you said is exactly right.

How tricky were the Japanese and Korean translations for these scripts, in terms of vetting for nuance or meaning and just logistics?

It was tricky. I laughed because that is probably the hardest thing about this show. I still have a little bit of PTSD about the process. And I was naive going into it. I write in English and you hire wonderful, brilliant translators and you get—and almost as if it’s a machine—a Korean script comes out and a Japanese script comes out.

I’ve learned that translation is such an art form. I have so much respect for translators now. Because what we found is, English works completely differently from Japanese, which works completely differently from Korean in many ways. So, there’s just so many judgment calls and creative decisions that need to be made in the translation. It was a really laborious process, but one worth taking. I just worked with really, really great people who were very patient, and most importantly, they cared about their work, which is why the translation is as good as it is. I’m really proud of the translation in this show.

When, where and how do you write? What is your ritual when you’re actually writing?

That’s a great question. So, I hate writing. I despise it. So I need to trick my brain into thinking I like writing, and I’m not kidding. I really despise it. So I did some research over the last few years, and I discovered something called binaural waves. And it’s basically… I’m not going to speak in scientific terms because I’m not a scientist, but you listen to these sound waves that are modulated at different frequencies. And you have to find your own frequency that gets your brain into that zone or what some people call the flow.

So I have my binaural waves. I have my megahertz frequency that I listen to. And it’s just, it’s sort of almost like your brain goes into a zone where it's really focused and the outside world slowly fades away. Otherwise, I really despise it.

So you use some kind of device to get that particular frequency?

And it really kind of flipped a switch for you?

It did. I used to write to music when I was much younger, and the older I get, I can’t write to music. It’s too distracting to me. So this was sort of the happy medium.

That is one of the most unique answers I’ve ever had for that question. I think this company is going to owe you a sponsorship for the shout-out.

Oh, good. Maybe I may stop writing then. Yeah, I can retire.